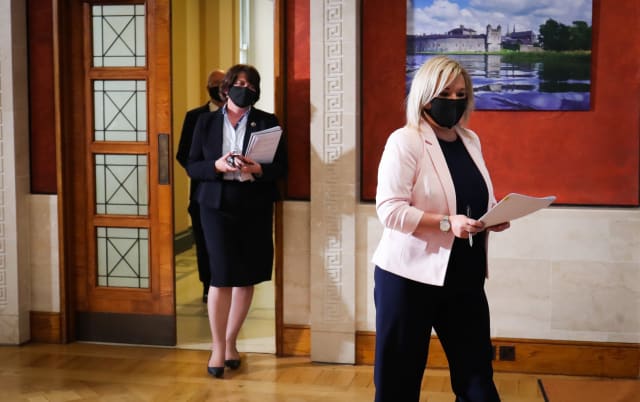 The Northern Ireland Executive has reconvened in a bid to resolve the deadlock over the next phase of Covid-19 restrictions for the region.

They are at odds on whether to extend, amend or relax the current four-week circuit-break measures, which expire at midnight on Thursday.

Amid sustained pressure on hospital admissions, ministers in the five-party executive are debating whether to remove the restrictions from Friday onwards or extend some or all of them for a further two weeks.

A majority of other ministers appear to favour allowing close contact services to resume, as long as strict precautions are observed.

It appears pubs that do not serve food will be unlikely to get approval to reopen.

Ministers are at loggerheads on how much of the rest of the hospitality sector will be allowed to resume trading.

The DUP is pushing for more widespread easing of restrictions than Sinn Fein, the UUP, SDLP and Alliance Party are prepared to support.

“We have a determination to work together to find a solution,” she said.

One option understood to have been under consideration by ministers was cafes and restaurants being allowed to reopen without alcohol being sold.

But there are doubts whether ministers will press ahead with this proposal, given the hostility expressed by some members of the hospitality sector.

Restaurant owners have said the inability to sell alcohol would make trading unviable.

Another potential option is non-licensed premises such as cafes being allowed to reopen while those business that do serve alcohol remain closed.

Mrs Foster told the Assembly there is a need to develop a “clear exit strategy” from lockdown measures.

“I do not believe that we can continually go into circuit breakers, lockdowns, call them what you will,” she said.

Sinn Fein MP Chris Hazzard said his party supported the resumption of close contact services but believed the restrictions on the hospitality sector should be extended.

Mr Hazzard said it would be reckless to throw away progress in reducing infection rates.

“I think there is a case to be made when it comes to close contact services, you could look at relaxations,” he told BBC Radio Ulster.

“But I think on the whole it’s important we find a way forward now that sees us through to the new year and, to me, that means restrictions must stay in place for another two weeks.”

In a clear indication of the strength of opposition among some DUP members to extending restrictions on businesses, party MLA Paul Frew accused the Executive of committing an “act of vandalism” on the economy.

Mr Frew, who also criticised the introduction of the circuit-break last month, branded the actions of the administration, particularly the delay in providing clarity to businesses, a “shame, disgrace and farce”.

“We have businesses, owners asking do I bring my supply chain in, do I order all that food, do I fill my freezer,” he told MLAs.

“This is a tremendously harsh time for business and yet this Executive is causing an act of vandalism to those businesses.

“It is an act of vandalism to not be able to tell a business on the Tuesday that they can open up for sure on the Friday, that they can fill their fridges and freezers, they can bring in their stock and they can pay their supply line.