Santas given video-call training for a socially-distanced Christmas 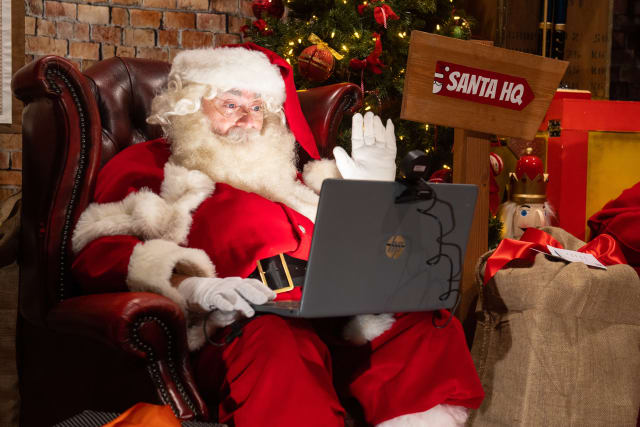 A host of professional Santas have received video-call training to prepare them for a socially-distanced Christmas.

The training comes ahead of the launch of a new app, Santa HQ, which will allow children to speak with Father Christmas without needing to visit a traditional grotto.

Student Santas met in London on Tuesday for technical training for the service, which is a collaborative project between the Ministry of Fun Santa School and the digital agency Prism.

“A lot of work has gone into this launch today, because what we’re having to do is create an alternative to the Christmas grotto,” James Lovell, the director of the Ministry of Fun Santa School, told the PA news agency.

“Last year we had over 1,000 booking for Santa’s grottos all over the country, this year we’ve got about a tenth of that.”

Mr Lovell said aside from the one-on-one calls with St Nick, the service will also provide a 32-day “Christmas adventure” with Santa’s elves from November 25.

Each day children will be able to take part in an activity with the elves, including joke-telling, arts and crafts, and making a recipe.

“There’s some background story to that where one elf is learning how to be an elf,” added Mr Lovell.

“He’s new and he wants to maybe accompany Father Christmas on his sleigh on Christmas Eve, so we may find out at the end whether he manages it or not.”

One of the Santas told PA: “Every year is a busy year… but you know what, we self-isolate anywhere.

“Father Christmas self-isolates for 11 months because we’re up in the snow near the North Pole, so it’s not made any difference to us really.

“And all the reindeer when they’re on the sleigh they’re at least two metres apart.

“But you know, this year especially all the boys and girls around the world… they deserve something very special and that is what Santa HQ is all about.”

Prices for the Santa HQ service will vary between £10 and £30 depending on features.