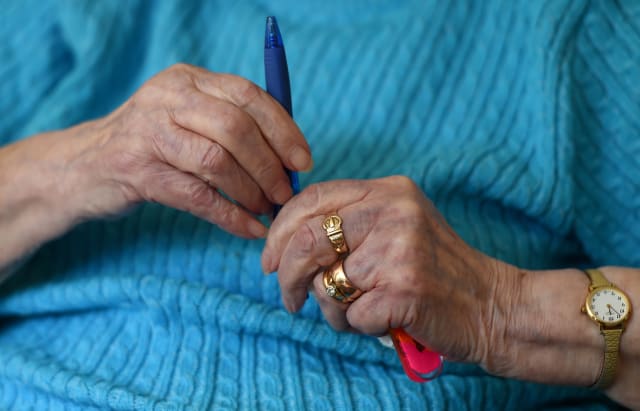 Experts analysed data from more than 17,000 cases of ovarian cancer diagnosed across England between 2016 and 2018.

Three in five (60%) women with ovarian cancer over the age of 79 did not receive either chemotherapy or surgery.

While 37% of women over the age of 70 did not receive any treatment.

The nature of ovarian cancer means that surgery is essential in the large majority of cases to remove the tumour.

The researchers cautioned that with an aging population, it is vital that women of all ages have access to the best possible treatments.

Researchers also examined the various rates of treatments for ovarian cancer among women in different parts of England.

They found that the probability of receiving any treatment fell below the average in the East Midlands, the East of England, Greater Manchester and Kent and Medway.

The report was jointly funded by The British Gynaecological Cancer Society, Ovarian Cancer Action, Target Ovarian Cancer and delivered by analysts at the National Cancer Registration and Analysis Service.

Commenting on the report, Cary Wakefield, chief executive of Ovarian Cancer Action, said: “Neither your age nor location should decide your chance of survival if you are diagnosed with ovarian cancer.

“Our audit is the first step in addressing the health inequalities women across England face, so we can begin to dismantle them.”

British Gynaecological Cancer Society president, professor Sudha Sundar, added: “We now need a fully funded audit to identify and rectify what factors are responsible for this worrying variation in anticancer treatment received by women across England.

“We know that these factors can be organisational, for example availability of theatre lists or intensive care beds; we will be urging our members to carefully look at this data and discuss this with their hospital trusts.”

Annwen Jones, chief executive of Target Ovarian Cancer, said: “Our audit has identified a real opportunity to improve ovarian cancer survival rates in England as we come out of this pandemic.

“It’s totally unacceptable that some women are being denied the most effective treatment options based on anything, let alone postcode or age, and these inequalities must be addressed.”

Almost 7,000 women are diagnosed with ovarian cancer in England each year.

Only a third (35%) will survive their cancer for more than five years. The UK has one of he lowest ovarian cancer survival rates in Europe, experts said.