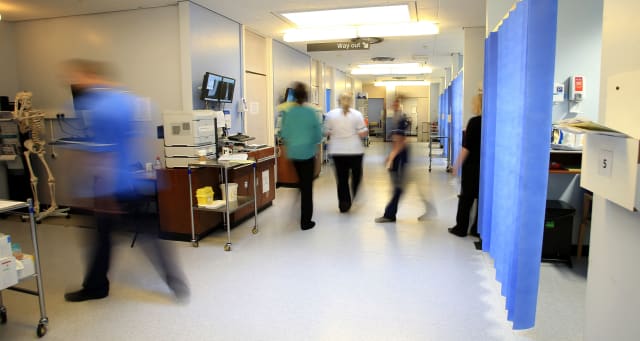 The number of people referred for routine NHS hospital care has dropped by a third as the coronavirus pandemic takes its toll on the nation, a new report suggests.

The Health Foundation said that during he first eight months of 2020 there were almost five million fewer people referred for routine hospital care in England.

The think tank said the figure represents a “hidden backlog” of care as it called for a sustainable way forward to treat non-Covid patients.

Without action, “long waits could become the norm for millions of people”, it warned.

And the Royal College of Surgeons of England said: “We cannot accept that the ‘new normal’ means waiting a year for an operation.”

Analysis conducted by the organisation found that there were 4.7 million fewer people referred for routine hospital care – such as hip, knee and cataract surgery – between January and August 2020 compared to the same period in 2019.

This is a reduction of 34%, the Health Foundation said.

Both the suspension of services and patients being put off seeking care could be to blame, the authors of the Health Foundation report suggest.

They said that more needs to be done to plan for the backlog – including the people who are already on the NHS waiting list.

Deeper analysis of the figures found that:

– Trauma and orthopaedics – which includes surgery for hip and knee replacements – had 622,593 fewer referrals.

– Ophthalmology services – which will include surgeries like cataract operations – had 531,660 fewer referrals.

– Dips were also seen in thoracic medicine, neurosurgery and urology.

The Health Foundation’s senior policy fellow, Tim Gardner, one of the report authors, said: “While the NHS is rightly focused on the urgent task of fighting Covid-19, there is meanwhile a rising tide of unmet need which will have a significant impact on people’s health if a sustainable solution is not found.

“The NHS made significant progress towards fully reopening services after the first peak of the pandemic, but there is still a potentially huge hidden backlog, as the health service is undertaking far fewer routine procedures compared to last year.

“While the NHS is working hard to address the backlog, radical interventions will nonetheless be needed to avoid prolonged delays for those currently waiting for things like hip, knee and cataract surgery, as well as those not yet on any waiting list.

“There is no silver bullet – addressing these issues will take time, money and determination.

“A range of options should be explored – including making greater use of the independent sector, greater use of remote consultations, and creating dedicated diagnostic hubs and elective care centres. If no action is taken, long waits could become the norm for millions of people.”

Commenting on the report, Professor Neil Mortensen, president of the Royal College of Surgeons of England, said: “Suspending elective surgery during the first wave of Covid created an enormous backlog of operations, in a system which was already overstretched.

“Although frontline staff made huge efforts to get surgical services going again over the summer, it has been impossible to catch up. The latest published NHS data showed that in August 2020, more than 100,000 people had waited longer than a year for treatment.

“We now face a challenging few months, with looming winter pressures, so every option must be fully explored to keep planned surgery going.

“This includes using the independent sector to create additional beds and theatre capacity, as suggested by the Health Foundation.

“Looking ahead to next year, we must establish a clear plan for the full recovery of surgery, with the money, staff and hospital facilities required to eliminate the backlog.

“People understand that this year it’s been very hard to stop waiting lists from getting longer. But now, with expanded testing capacity and a vaccine looking imminent, we cannot accept that the ‘new normal’ means waiting a year for an operation.”

An NHS spokesman said: “At the height of the first peak, some people chose to postpone care, but the latest figures show that hospitals are carrying out more than a million routine appointments and operations every week and the NHS message to the public has always been clear – do not delay, help us to help you by coming forward for care.

“Keeping the virus under control is key to being able to continue all routine care so it is vital that everyone plays their part by following the Government guidance.”