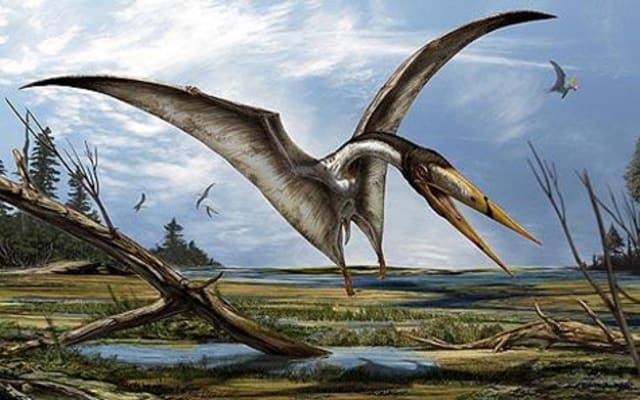 A trawl through century-old fossil collections has led to a surprising find – a new mystery species of pterosaur.

The legendary flying lizards ruled the skies millions of years ago but the new find is like nothing palaeontologists have seen before.

It was discovered by PhD student Roy Smith, who found the puzzling creature among fossil collections housed in the Sedgwick Museum of Cambridge and the Booth Museum at Brighton.

The fossils in the collections were found by workmen digging in the English Fens in the latter half of the 19th century.

What were believed to be fossils of shark spines, he realised, were actually fragments of jaws of toothless pterosaurs.

The pieces did resemble shark spines but University of Portsmouth student Mr Smith says there are key differences that allow them to be distinguished.

He said: “One such feature are tiny little holes where nerves come to the surface and are used for sensitive feeding by the pterosaurs.

“Shark fin spines do not have these, but the early palaeontologists clearly missed these features.

“Two of the specimens discovered can be identified as a pterosaur called Ornithostoma, but one additional specimen is clearly distinct and represents a new species. It is a palaeontological mystery.”

The specimen found is too fragmentary to be the basis for naming the new species, he says.

“Sadly, it is doubtful if any more remains of this pterosaur will be discovered, as there are no longer any exposures of the rock from which the fossils came.”

However, Mr Smith hopes that other museum collections may contain more pieces of the mystery creature and vowed to continue his search as soon as Covid-19 restrictions are lifted.

He added: “This is extremely exciting to have discovered this mystery pterosaur right here in the UK.

“This find is significant because it adds to our knowledge of these ancient and fascinating flying prehistoric reptiles, but also demonstrates that such discoveries can be made, simply by re-examining material in old collections.”

Also involved in the study as an author was Dr David Unwin from the University of Leicester’s Centre for Palaeobiology Research.

The results of Roy Smith’s discovery have been published in The Proceedings of the Geologists’ Association:https://www.sciencedirect.com/science/article/abs/pii/S0016787820300997?via%3Dihub