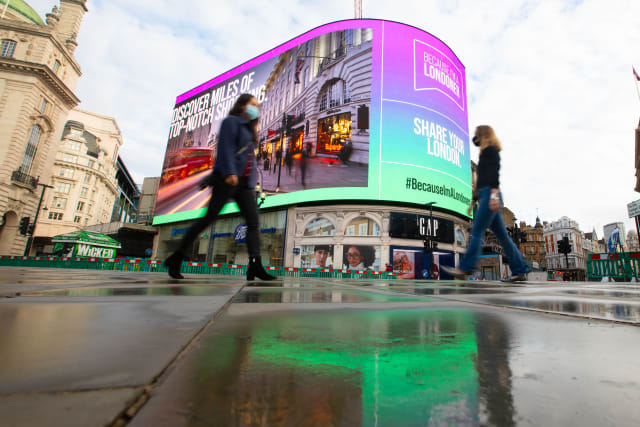 Commercial property giant Land Securities (Landec) has dived to a mammoth £835 million loss for the past half-year after the value of its empire fell by £945 million.

The company said it slumped to the loss for the six months to September 30 from a £147 million loss over the same period last year.

Landsec, which owns Piccadilly’s famous advertising boards among its portfolio, said its property estate was now worth £11.8 billion after major write-downs in the half-year.

It said its retail income was down 10% against the same period last year, after the Government introduced a moratorium on lease forfeiture over unpaid rents.

The group’s central London portfolio is now valued at around £7.9 billion and represents around 67% of its assets.

It said it will focus on “optimising” its sites in the capital and remains committed to the city centre despite the area being impacted by guidance for people to work from home and lower tourist numbers.

Mark Allan, chief executive of LandSec, said the investment market for high-quality London office assets has remained robust despite the pandemic and told investors he is therefore “optimistic about the future”.

He said: “While today’s results clearly show the impact of the pandemic on our business, Landsec remains in a fundamentally strong position.

“Together, the high quality of our portfolio and low leverage of our balance sheet provide a solid foundation for executing our growth strategy and creating value for all stakeholders.

“This strength also means we have been able to take a proactive and responsible approach to the challenges of Covid-19, supporting our communities and customers.”