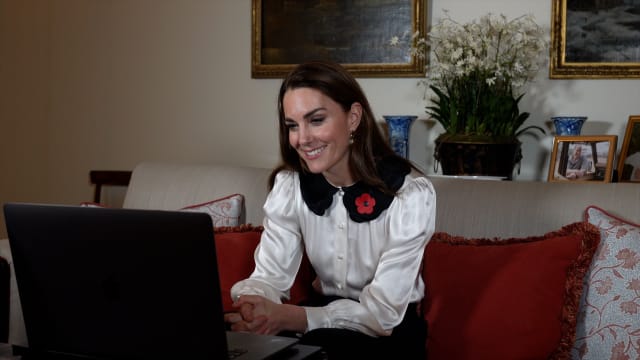 The Duchess of Cambridge has sympathised with military families who have lost loved ones, telling them they should be “proud” of their achievements and “the sacrifice and the bravery that they’ve shown”.

Kate marked Remembrance week by speaking to three women who have mourned the loss of partners or immediate family, and heard how they have been supported by the Royal British Legion.

Speaking via a video call on Monday, the duchess said: “I’m sure you spend your time every day remembering your loved ones but it’s so important that the nation comes together and really spends time thinking about those who have lost their lives and the families that have been impacted.

“It’s been a real honour to speak to all of you and I think I speak for the whole nation when I say just how proud you should be of your loved ones, and for the sacrifice and the bravery that they’ve shown.

“I’ll certainly be thinking of you this difficult week and will be for many years to come.”

Last week, the Duke of Cambridge held video calls with members of the RAF, Navy and Army – and told British Armed Services serving around the globe the nation was “grateful” for their sacrifices.

The Duchess chatted to Sonia Fleming from Rhyl, Wales, and her son Charlton Taylor, 11, about the schoolboy’s father Royal Marine Michael Taylor, who was killed in action in Afghanistan in 2010.

Kate asked Charlton, who was dressed in his school uniform, to tell her about the three medals he was wearing. “Are those your daddy’s medals? Wow. Its very special that you’re wearing them.”

The Duchess asked him if he would tell her a little bit about his father, but laughed when he said he could not remember much, adding: “I think mum would explain it best, you take the floor, mum.”

Charlton’s mother, Sonia Fleming, described how her husband had died when Charlton was 10 months old and her other sons were 11 and 13.

“Probably the hardest thing is doing it on your own,” she said.

Serena Alexander, from London, described the moment that her son, Sam, told her he wanted to join the Marines before going on his first tour to Afghanistan, when he was awarded the military cross for rescuing his commanding officer from the Taliban.

“Very sadly on his second tour, they were inspecting a compound and an IED went off and killed Sam, his commanding officer and an interpreter,” she said.

“That was when we first met the Royal British Legion, firstly on repatriation when they were just so kind at Wootton Bassett and just so warm and loving and helpful and just friendly at a time that was so dreadfully sad.”

Mrs Alexander told the Duchess that it was such a bleak time, the Legion had provided a “kind of comfort blanket” with not just practical support but also moral support that was so welcome.

Chantelle Wynn, from Tamworth, was widowed in 2015 when her husband Ryan took his own life after struggling for years with post traumatic stress disorder, following a posting in Afghanistan, where he worked for six months as a medic in the Territorial Army.

The couple had been together since they were 16 and were married for 17 years. They had two daughters, Rosie and Daisy.

Mrs Wynn told the duchess: “Obviously, this time of year is always really bad and with his anniversary the day before Remembrance day, this week is really significant. But we plod on and we’ve got family who support us so we get through.”

She explained she had no idea what the Royal British Legion really did until she needed them, revealing that it had provided crucial financial and emotional support.

The duchess, who had a poppy pinned to the black collar of her white blouse, asked what Remembrance Day meant for her and her family.

“We’ve always gone out and gone to the parades, which we still do now with the children just to show them that you have got to remember those who fought and those who have got invisible injuries and burdens – it’s not just those servicemen who died while they have been over there,” she said.