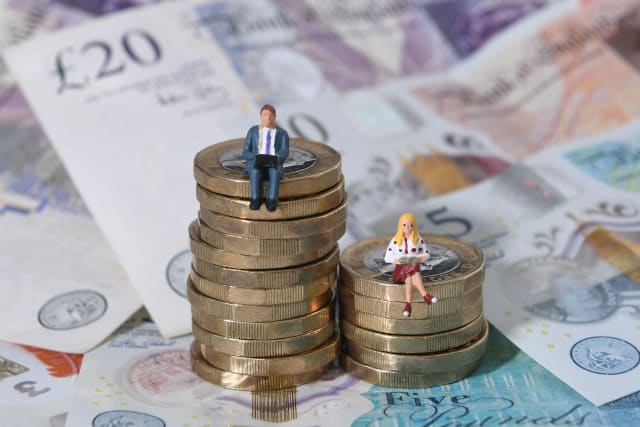 The pensions saving gap between men and women has narrowed to the smallest levels on record, according to a report.

Nearly three in five (59%) women aged over 30 are saving adequately for their retirement as are 60% of men, according to the 16th annual Women and Retirement Report from pensions giant Scottish Widows.

The one percentage point gap is the narrowest in the history of the reports.

Historically, around 40 to 45% of women have been saving adequately compared to 50 to 55% of men, the latest report said.

People are deemed to be saving adequately if they are putting away at least 12% of their income, including employer pension contributions and tax relief, or if they are in a defined benefit (DB) pension which promises a certain level of income in retirement, such as a final salary scheme.

Despite the narrowing gap, the average man deemed to be saving adequately is putting away £1,300 a year more than a woman, the report found.

This is a reflection of how the earnings gap women often face over their working lives translates into a pensions gap later in life.

This means a man would typically be deemed to be saving adequately by putting away just over £3,600 (12% of salary) a year.

But a woman would typically be considered to be saving adequately with around £2,300 saved each year – £1,300 less than a man.

Over the course of a working lifetime, this can lead to huge inequalities in retirement savings.

Scottish Widows said that, when part-time working and career breaks are taken into account, a woman could potentially end up with a savings pot worth £100,000 less than that of a man.

Most of this gap would be driven by differences in income rather than savings rates, it said.

The report also said young women are among those struggling most to save for later life.

Just 46% of those in their 20s are saving the recommended minimum 12% of salary. This compares with 56% of men the same age.

Not saving more while young means women miss out on the benefits of compound interest – interest on interest which has previously been built up – which can boost savings pots substantially.

Jackie Leiper, managing director of workplace savings at Scottish Widows, said: “While we’re heartened at the record levels of saving, there’s still a mountain to climb before we reach true gender pension parity.

“Women face decades of extra working before they’ll have a pension to match that of a man’s, which is unfair and unacceptable.

“Until we can resolve structural inequalities, from the gender pay gap to the uneven division of labour at home, we will never have pension equality.”

She added: “We’re calling for urgent pension reforms that will help more women save more for retirement, including improved childcare provisions, enhanced pensions for those on maternity leave, the inclusion of pensions in divorce proceedings, and the scrapping of the (workplace pensions) auto-enrolment minimum earnings threshold.”

Two major surveys, one involving more than 5,700 people and another with more than 2,200 people, were carried out for the report.

Helen Morrissey, pension specialist at Royal London, said: “Any narrowing of the gender pension gap is to be welcomed but we can’t ignore the fact that the system remains hugely stacked against women.

“Retirement prospects are damaged as soon as women leave the workforce to carry out caring duties and the lack of affordable childcare means many women are unable to plug the gap. This is an issue Government must tackle urgently if this situation is to be resolved.”

Phil Brown, director of policy at the People’s Pension, said: “While changes to pensions policy, such as broadening the age and earnings eligibility for automatic enrolment, will help, it’s vital that more women have access to affordable quality childcare.”

A Department for Work and Pensions (DWP) spokesman said: “Our ground-breaking pension reforms, including automatic enrolment, have helped millions more women save into a pension, many for the first time. Pension participation among eligible women working in the private sector has risen from 40% in 2012, to 86% in 2019.”