Foster confident of consensus on coronavirus restrictions for Northern Ireland 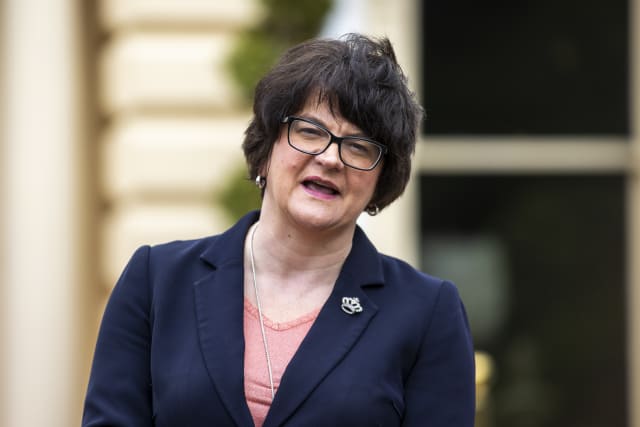 Arlene Foster has expressed hope the Northern Ireland Executive will reach an agreed position on new Covid-19 restrictions for the region.

The First Minister’s comments come amid deadlock within the administration on whether to extend, amend or relax the current four-week circuit-break measures, which expire at midnight on Thursday.

Ministers are due to meet again later on Tuesday after discussions on Monday failed to secure a breakthrough.

Amid sustained pressure on hospital admissions, ministers in the five-party executive are at odds over whether to remove the restrictions from Friday onwards or extend some or all of them for a further two weeks.

A majority of other ministers appear to favour allowing close contact services to resume, as long as strict precautions are observed.

It appears pubs that do not serve food will be unlikely to get approval to reopen.

Ministers are at odds on how much of the rest of the hospitality sector will be allowed to resume trading.

The DUP is pushing for more widespread easing of restrictions than Sinn Fein is prepared to support.

Addressing the Assembly during a question session on the recent British Irish Council (BIC) summit, the First Minister said an agreed way forward can be found.

“I think we are all dealing with very difficult situations at the moment, we will have an executive meeting later today and I very much hope that consensus can be achieved,” she said.

“We’re in a five-party coalition, Mr Speaker (Alex Maskey), and there are many administrations across the United Kingdom and the other administrations in the BIC who do not have to deal with differing political philosophies and ways forward.

“But we will work together, we have a determination to work together to find a solution and that will happen hopefully today.”

One option understood to have been under consideration by ministers was cafes and restaurants being allowed to reopen without alcohol being sold.

But there are doubts whether ministers will press ahead with this proposal, given the hostility expressed by some members of the hospitality sector.

Restaurant owners have said the inability to sell alcohol would make trading unviable.

Another potential option is non-licenced premises such as cafes being allowed to reopen while those business that do serve alcohol remain closed.

Mrs Foster told the Assembly there is a need to develop a “clear exit strategy” from lockdown measures.

“I do not believe that we can continually go into circuit breakers, lockdowns, call them what you will,” she said.