Tears of joy as Pfizer staff told of vaccine breakthrough 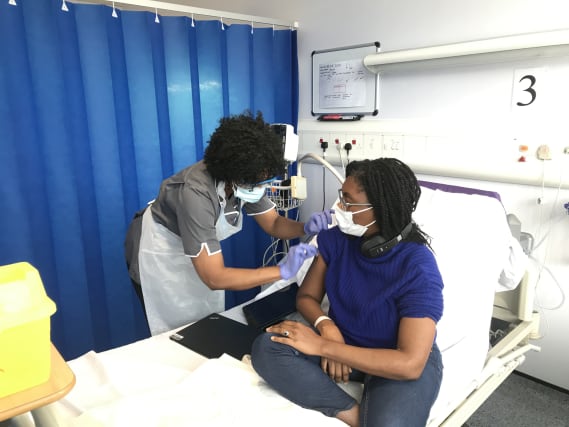 There were tears of joy and celebrations as the interim results of Pfizer’s new coronavirus vaccine were announced to employees, the company’s chief scientific officer said.

Mikael Dolsten said his colleagues were “screaming” with excitement as they were told that the pharmaceutical giant’s new jab could prevent people developing Covid-19.

Preliminary analysis has found the vaccine to be more than 90% effective.

Mr Dolsten told BBC News on Monday that he was gathered with a handful of colleagues in the company’s Connecticut office in the US when they were given the update.

He said: “We were sitting, a handful of people, socially distanced with masks on. The video turned on and the colleagues who had just been debriefed started to update us and you could hear everyone screaming: ‘Oh my god, this is just unbelieveable’.”

Mr Dolsten said it “felt like a historic moment”. But he added there were “more steps that need to happen”.

“We feel like we are on the cusp of one of the biggest medical advances for society and mankind in a 100 years that have passed here,” he said.

“But we (will) work hard to make sure that the promise is delivered and it was an amazing moment. I wish you could have been there with me. It was joy and tears all at once.”

The vaccine has been tested on 43,500 people in six countries and no safety concerns have been raised.

Pfizer and its partner BioNTech plan to apply to the US Food and Drug Administration – the US medicines regulator – by the end of the month for emergency approval to use the vaccine.

Mr Dolsten said: “It’s a once-in-a-lifetime experience for me and I have been part of many, many medicines and vaccines in my career. But nothing beats when you have seen this tremendous suffering.”

He added: “We are winning this battle. That is my belief today.”