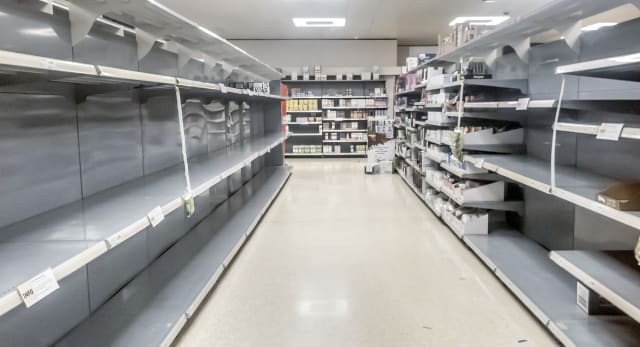 Stormont’s leaders have warned the European Commission of the urgency of striking a deal to maintain continuity of food supplies into Northern Ireland from Britain.

Arlene Foster and Michelle O’Neill told Commission vice president Maros Sefcovic that is was “unacceptable” that it remained uncertain how the Northern Ireland Protocol would operate, less than two months before it comes into operation at the end of Brexit transition period.

Their letter to Mr Sefcovic comes amid the ongoing failure of the UK and EU to agree a practical framework that could potentially minimise the number of new regulatory checks required on food products entering the region from GB.

Mrs Foster and Ms O’Neill have also expressed their views to the UK government.

Writing to Mr Sefcovic they relayed the concerns of major supermarket representatives that trade could be badly disrupted if the mechanics of the protocol are not mutually agreed.

“These representatives have emphasised how critical the current situation is, with a real threat to the continuity of the supply of existing food and other products to our market unless these issues are urgently addressed and solutions found,” they wrote.

“This is an unacceptable situation for us to be in, especially so late in the process.”

The ministers acknowledged they have “very different political views” on the protocol, however they stressed they were united in securing the best working outcome.

Mr Sefcovic and senior Westminster Cabinet minister Michael Gove co-chair the joint committee established to hammer out the working of the protocol.

Under the protocol, which is contained in the Brexit Withdrawal Agreement, Northern Ireland will remain in the EU single market for goods when the transition period ends.

The committee is trying to agree derogations that would cut down on the number of physical checks required.

Stormont’s leaders stressed the need for a swift resolution to the process.

“It is hard to imagine a more fundamental aspect of everyday life than the purchase of daily food supplies,” they wrote.

“Hence we would ask you to recognise how important it is that the current consideration of the detail of how the protocol will be applied takes our unique context into account.”

They added: “We recognise clearly the absolutely importance of the SPS controls to the European Commission and member states and we would want to make it clear that we are not asking for anything that would create any form of health risk. We are hopeful and confident that with goodwill and pragmatism an agreed approach can be settled and applied.”

Mrs Foster and Ms O’Neill said they looked forward to an “urgent resolution” of the situation.

“We hope that you find this letter a helpful conformation of the issues that are of most concern to us and that good progress can be made very quickly,” they said.