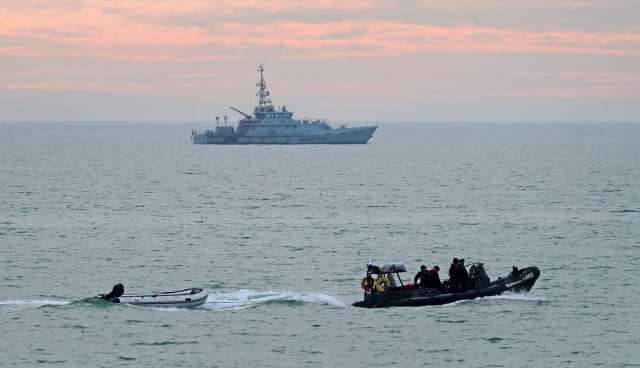 Looking out from Kingsdown beach on the south coast, a 140ft Border Force patrol cutter could be seen watching on as a migrant dinghy was towed along the shoreline.

The scene unfolded on Monday morning beneath a glowing autumn sky, similar to many others in 2020.

The grey dinghy, complete with outboard motor, is believed to have made the dangerous crossing after setting off from France early in the morning.

More than 7,600 people have crossed the English Channel to the UK this year, according to analysis by the PA news agency.

This is several times the number for 2019 and comes despite the Home Office sending a war drone and RAF planes to the English coastline in an effort to make the route “unviable”.

Travelling in everything from rubber boats to kayaks to a paddling pool, huge numbers have attempted the perilous journey.

And while the number of crossings have dropped as the year turns towards winter and sea conditions worsen, a patch of good weather in the last few days has seen a small flurry of arrivals.

This is despite the tragic deaths of a Kurdish-Iranian family when a migrant boat sank last month.

Border Force intercepted at least 144 people travelling on 10 boats on Sunday, and more have arrived on Monday.

People wrapped up in red blankets and life jackets were seen being led ashore in Dover, helped by immigration officials.

Meanwhile staff were seen manoeuvring yet more dinghies into a line, believed to have been used by migrants making the journey from France.

Along the coast, a boat believed to have been used in a beach landing was picked up by Border Force officers and towed back to Dover.

So far nearly 250 people have arrived in the UK in small boats in November, a far cry from the nearly 2,000 in September.