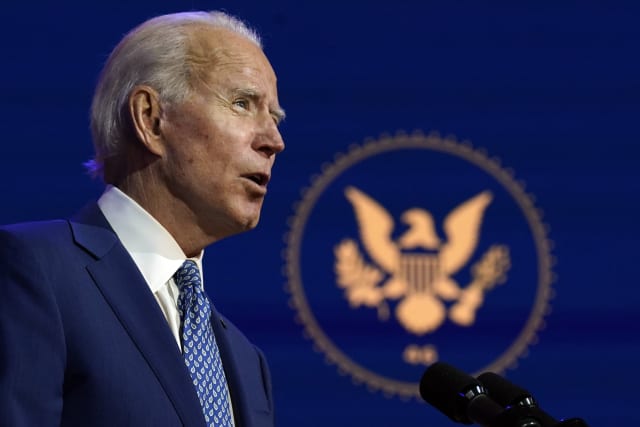 The Prime Minister has not yet spoken to the president-elect and the relationship with the Biden camp could be frosty after Mr Johnson’s close ties with Donald Trump.

In an effort to demonstrate where their interests align, Mr Johnson hailed the “exciting” change in approach that a Biden administration will represent on key international issues.

“And I’ve no doubt that we will continue to have a very, very strong, very close relationship with our American friends.

“And one thing I think is very exciting, that you’re already seeing from the incoming administration is their willingness to join the UK in the campaign to tackle climate change.”

He said that “suddenly, with president-elect Biden we’re seeing the US really willing to take a lead on climate change”.

Donald Trump pulled the US out of the Paris climate change treaty and has previously claimed the issue is a hoax.

Mr Johnson also highlighted support for Nato as a policy where the incoming US administration would mark a shift from the Trump era – the outgoing president has been highly critical of the alliance although he stopped short of withdrawing from it.

The Prime Minister refused to say Mr Trump should concede defeat, as the US President continued to fight legal battles in his effort to retain the keys to the White House.

“I don’t wish to offer any other commentary on the US election, our friends in America have their processes, it’s not for me to offer commentary on it,” he said, but added: “I clearly want to congratulate president-elect Biden.”

Downing Street played down concerns about the potentially difficult relationship it will have with the Biden administration.

Asked if it was a worry that the UK may not be the among the first nations Mr Biden will speak to, the Prime Minister’s official spokesman said: “No, that’s not something that we’re concerned about.”

The Prime Minister has never met Mr Biden, who has previously described Mr Johnson as a “physical and emotional clone” of Mr Trump.

Allies of Mr Biden, who was Barack Obama’s vice-president, have also not forgiven Mr Johnson for highlighting the first African American president’s “part-Kenyan” heritage, claiming it had given him an “ancestral dislike of the British empire”.

Meanwhile, Mr Biden used a speech on Monday to highlight the continued danger posed by coronavirus.

He urged Americans to “wear a mask” to help fight the spread of coronavirus.

He said: “We are Americans, and our country is under threat.”

Mr Biden does not take office until January 20 2021 but said he was assuming a public leadership role in the fight against the pandemic ahead of being sworn in.

Shortly after the speech, Mr Trump fired his defence secretary Mark Esper and replaced him with counterterrorism head Christopher Miller.

Mr Esper was confirmed as defence secretary in July 2019 but had clashed with the president on issues such as whether military bases named after Confederate figures should be renamed.