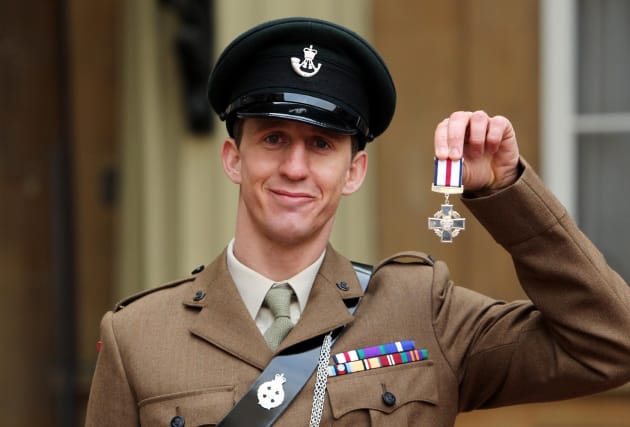 A soldier who won one of the highest military honours for bravery has spoken of his shock that his heroic actions have been questioned.

Deacon Cutterham was awarded the Conspicuous Gallantry Cross, one level down from the Victoria Cross, for picking up and hurling away a Taliban grenade.

But some soldiers who served with Mr Cutterham in Helmand province told the BBC they disputed what happened that day in Afghanistan in 2011.

Mr Cutterham told the PA news agency: “I’m just surprised. I can only hazard a guess that they are either jealous or envious. The action happened and I stand by the events that day.

“The citation wasn’t written by me, it was written by the commanders. The award is rigorously tested through several committees before being granted.

“I’m proud of the fact I saved those soldiers’ lives. What if I had jumped the other side of the ditch and the grenade exploded and killed both those blokes?  My name would have been mud.”

Mr Cutterham, 37 and from Bristol, joined the Army at 16 and served in both Iraq and Afghanistan during a 19-year military career with the 1st Battalion the Rifles.

His medal citation reads: “The action itself was utterly courageous, carried out with composure and clarity of thought. Cutterham’s gritty leadership and gallant act saved lives and inspired his men.”

Mr Cutterham is now selling his collection of medals at auction on November 12 and will use the proceeds of the sale to support his family.

The medals are expected to fetch up to £120,000 when they go under the hammer at Dix Noonan Webb.

One former colleague told the BBC: “I don’t believe he earned that medal and now he might make money from it.”

Another told the broadcaster: “We didn’t care if he wanted to tell people how brave he was. What we care about now is him making financial gain from this.”

Mr Cutterham said he was “heartbroken” by the accusations from unnamed former colleagues.

“I’m really surprised and disappointed by what people have said. I served with them for four years after Herrick 14 and never did one of them approach me and say that never happened,” he said.

“It’s just heartbreaking and surprising and I am shocked.”

Mr Cutterham said he was medically discharged from the Army after developing PTSD.

“I don’t blame the Army for that. These accusations are just exacerbating the situation,” he said.

“These events were nine years ago, and they’ve seen I’m coming into a bit of money and they are jealous and envious.

“I am in absolute shock and I don’t think it has hit home. It seems like a witch-hunt. I’m not even frustrated, just gutted.”

Mr Cutterham admitted he was not in the Army to make friends and was a tough soldier who expected 100% from the soldiers under his command.

“They have got parents and I have got to bring their boys and girls home to them,” he said.

“They didn’t like me because I wasn’t complacent, I was professional, and that’s why they all came home.”

A Ministry of Defence spokesman said: “Our service personnel display exceptional gallantry and courage while performing duties at home and abroad.

“Acts of courage that warrant an honour or award are rigorously scrutinised before being approved.

“If serving personnel have a grievance, there is a formal process for them to register their complaint through their chain of command, which would be looked into accordingly.”