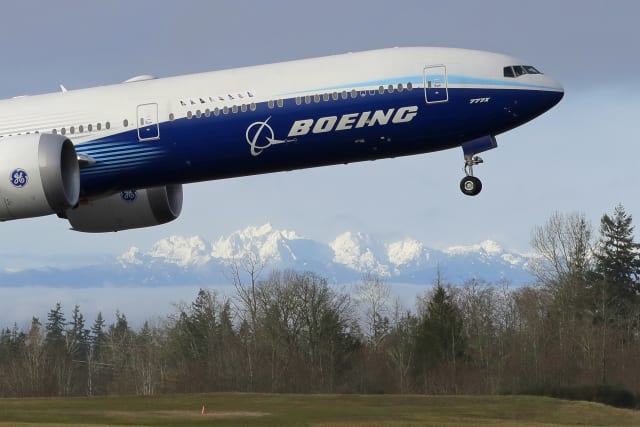 The European Union has agreed to put tariffs on up to four billion US dollars (£3 billion) worth of US goods and services over illegal aid for plane maker Boeing but expressed hope that trade ties would improve once President Donald Trump leaves office.

European officials agreed on the move a few weeks after international arbitrators gave the EU the green light for such punitive action.

The World Trade Organisation had deemed illegal some US support for Boeing – which is a rival to Europe’s Airbus – and said the EU could make up for that with a limited amount of penalties on US trade.

“Regrettably, in spite of our best efforts due to the lack of progress from (the) US side, we can confirm that the European Union will later today exercise our rights and impose counter-measures awarded to us by the WTO,” EU Commission Executive vice-president Valdis Dombrovskis said on Monday.

A year ago, the WTO ruled in a similar fashion in favour of the US, allowing it to impose penalties on EU goods worth up to 7.5 billion dollars (£5.7 billion) – including Gouda cheese, single-malt whiskey and French wine – over European support for Airbus.

After Mr Trump also imposed tariffs on EU steel and aluminium and threatened punitive duties on cars, the Europeans had hoped that he would hold fire on the tariffs related to the Airbus-Boeing dispute.

But having repeatedly failed to achieve a negotiated solution, the EU has now announced a punishment of its own.

“We call on the US to agree that both sides drop existing counter-measures with immediate effect so that we can quickly put this issue behind us,” Mr Dombrovskis told reporters after the meeting.

The EU is hopeful that Mr Trump’s hard-line trade stance will soften when president-elect Joe Biden takes office in January.

Mr Dombrovskis welcomed Mr Biden’s commitment to international alliances, the multilateral system and to improving ties with the EU.

German economy minister Peter Altmaier, whose country holds the EU’s rotating presidency, said the bloc has “great expectations” and “hope that the US presidential election will also be linked to a return to multilateral approaches to international trade, and that it will be possible to overcome past conflicts”.

In terms of tariffs over Boeing, the EU had released a preliminary list that suggested it could go after a wide range of US products including frozen fish and shellfish, dried fruit, tobacco, rum and vodka, handbags, motorbike parts and tractors.

Whiskey exports to the EU have already declined by 41% due to the bloc’s retaliation over Mr Trump’s tariffs on steel and aluminium in 2018.