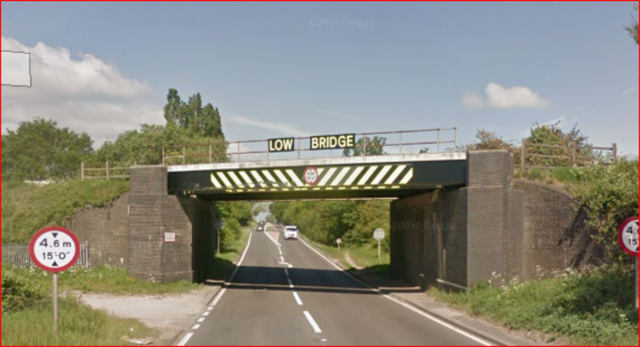 A railway bridge in Leicestershire has been named the most-bashed in Britain after being hit an average of twice per month.

Network Rail said Watling Street bridge on the A5 in Hinckley was struck by vehicles 25 times in the year to the end of March.

The Government-owned company said its bridges typically suffer five strikes every day, causing half a million minutes of delays for passengers while safety checks are carried out.

It has launched a Lorries Can't Limbo campaign, urging lorry drivers to check the height of their vehicle before starting their journey with more lorries expected on the roads ahead of Black Friday and Christmas.

The second-most struck bridge in Britain is the Bromford Road bridge in Dudley, West Midlands.

It was hit 24 times in just 12 months, causing almost 72 hours of disruption.

Network Rail – which has around 10,000 bridges over roads – reported an 11% year-on-year decrease in incidents, but warned the issue remains "a dangerous and costly concern".

Chairman Sir Peter Hendy said: "We've done a lot of work with partners across the industry in recent years to tackle bridge strikes, and whilst it's encouraging to see our work is paying off with numbers now on the decline, there's a lot more to be done to cut the unnecessary delays, costs and safety risks they pose."

Senior traffic commissioner Richard Turfitt wrote to haulage firms last month warning they could lose their operating licences if they fail to take appropriate measures to prevent bridge strikes, such as ensuring drivers are given adequate information about their vehicles.

Hideo Takano, senior structures advisor at Highways England, which maintains England's motorways and major A roads, said: "Bridge strikes can cause hours of disruption and – although we re-open our roads as soon as possible – we recognise the frustration delays can cause.

"Around two-thirds of bridge strikes on our roads are caused by vehicles carrying a load. So to reduce the risk of this happening, we urge all drivers to follow these simple steps: know your height, plan your route and secure your load."