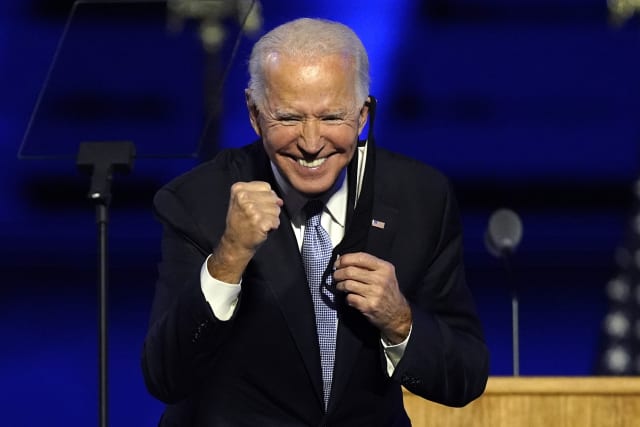 Ireland’s Foreign Affairs Minister has said that US president-elect Joe Biden will make a difference to the Brexit negotiations, adding that he is a “real friend of Ireland”.

Simon Coveney said that Mr Biden becoming the next president will give “pause for thought” to Number 10 to ensure that Irish issues are prioritised.

Mr Biden warned during his successful campaign against Donald Trump that a trade deal with the US is “contingent” on the prevention of a return to a hard border on the island of Ireland.

Mr Coveney said this is the most important week in the Brexit negotiations.

The House of Lords is expected to vote on the controversial Internal Market Bill on Monday, as EU and UK Brexit trade negotiations continue.

Mr Biden, whose ancestral home is in Co Mayo, has warned that the Good Friday Agreement cannot “become a casualty of Brexit”.

Asked if the incoming Biden administration makes a difference to the Brexit negotiations, Mr Coveney said: “I think perhaps it does. Joe Biden is a real friend of Ireland.

“He describes his life as being shaped entirely by his roots in Ireland.

“He’s somebody who, in the middle of this presidential campaign, has taken the time to make a very clear statement in relation to Ireland, the need to protect the Good Friday Agreement and the need to prevent a hard border at any point in the future linked to to Brexit policy and Brexit negotiations.

“He’s been very clear that Ireland and peace on this island, north and south, is very important to him.

“I think now that Joe Biden is going to be the next president of the United States, I certainly think that will be pause for thought in Number 10, to ensure that that the Irish issues are prioritised as we try to close out this phase of the Brexit negotiation.”

Part of the divisive legislation would give British ministers the power to override the Brexit divorce deal, something which the British Government has admitted would breach international law.

Mr Coveney said concluding the Brexit negotiations was “never going to be easy”.

“I think that this is arguably the most important week that we’ve had in the Brexit negotiations since this time last year when we were trying to close out a Withdrawal Agreement, which was tense and difficult and this is too,” he told RTE’s Morning Ireland.

“Concluding a negotiation as complex as a Brexit negotiation while trying to put a future relationship agreement in place between the EU and the UK, particularly on trade agreements, but also lots of other things as well was never going to be easy.

“But we really are in the end game now, and I think you’ll see a big effort this week to try to find a way of closing this out in a way that both sides can live with.”

He said the outstanding “big issues” preventing a trade agreement include the dispute over a “level playing field” around fair competition and the issues over fishing.

“Both sides need realism if there is going to a deal,” Mr Coveney added.