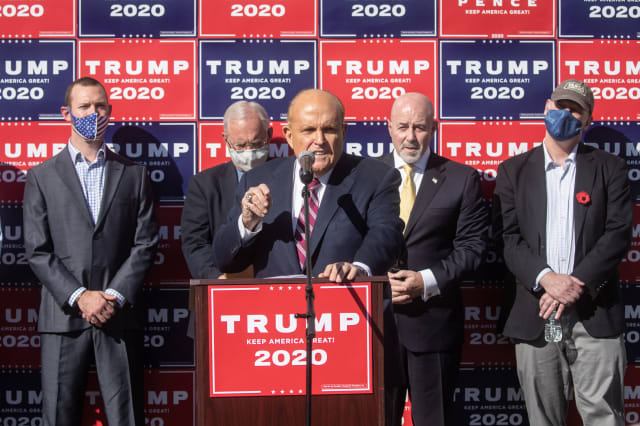 Less than an hour before news broke that Joe Biden was projected to win the 2020 presidential election, President Donald Trump announced that his legal team would be holding a press conference at "Four Seasons" in Philadelphia.

Trump, a hotelier at heart, announces a press conference at Philadelphia's "Four Seasons" at 11, before specifying it's at Four Seasons Total Landscaping at 11:30. pic.twitter.com/HmTIPeukNG

While many people assumed he meant the event would be held at a luxury hotel, the president clarified that the "big press conference" would take place at Four Seasons Total Landscaping, a landscaping company located on an industrial street.

Just in case there was any remaining confusion, the Four Seasons Hotel quickly confirmed that the press conference would not be happening on its premises, and that it has "no relation" to the landscaping company.

People on Twitter commented on the strange venue choice and the absurdity of the confusion caused by Trump's initial tweet.

the switcheroo from the four seasons hotel to "four seasons total landscaping" feels like an metaphor for the president's standing in the Pa tally as the week has progressed https://t.co/lkCTtWguge

When the history books look back at this period, the first sentence should be: "It started with a ride down an escalator and ended with a press conference at Four Seasons Total Landscaping."

At the press conference, Rudy Giuliani told reporters that the campaign planned to challenge the election in court, alleging election fraud. (Trump, who was golfing, was not present.) Those allegations are unsubstantiated.

The event largely was overshadowed by the news of Biden being projected to win the presidential election, with some reporters leaving before the delayed press conference began.

- This article first appeared on HuffPost