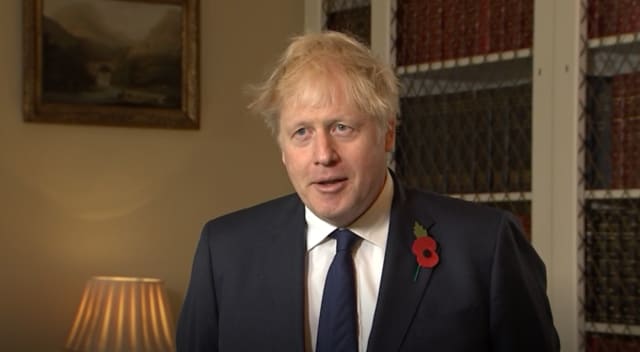 Boris Johnson is set to get in touch with US president-elect Joe Biden "shortly" after laying out the case for a close UK alliance with the new administration.

"The United States is our closest and most important ally, and that has been the case president after president, prime minister after prime minister – it won't change," the Prime Minister told broadcasters on Sunday.

"I look forward very much to working with President Biden and his team on a lot of crucial stuff for us in the weeks and months ahead: tackling climate change, trade, international security, many, many other issues."

It comes after reports that Mr Johnson is "war-gaming" his first conversation with the next incumbent of the Oval Office as he prepares to offer to build a coalition with the US to tackle climate change and join up on their shared mantra to "build back better" after coronavirus.

Mr Johnson, according to The Sunday Times, is said to have joked with Downing Street officials that Mr Biden was "one of the few world leaders I haven't insulted".

There could be work to do for Number 10 to prepare the relationship, however, after an aide of former president Barack Obama labelled the Prime Minister a "shapeshifting creep" following Mr Johnson's congratulatory tweet on Saturday.

Tommy Vietor, referencing Mr Johnson previously suggesting Mr Obama's "part-Kenyan heritage" was behind his "ancestral dislike of the British empire", said: "We will never forget your racist comments about Obama and slavish devotion to Trump."

Mr Johnson has not met Mr Biden – a point commentators suggested ex-prime minister Theresa May was alluding to when she tweeted a photograph of her and the long-serving politician – and in December 2019, the election victor labelled the Prime Minister a "physical and emotional clone" of Mr Trump.

Labour's shadow trade secretary Emily Thornberry predicted it would be "very difficult" for the Conservative Party leader to be "close to Joe Biden" after wooing the Trump administration since he came to power.

But Mr Johnson said there was "far more that unites" the UK and the US than divides when asked about the Democratic candidate's negative comments about him.

"I think there is far more that unites the Government of this country and governments in Washington at any time and any stage than divides us," he said.

Taking questions on whether Mr Biden's win would put the chances of a US-UK trade deal at risk, the Prime Minister said he knew Washington had "tough negotiators" and that he "never believed this was going to be something that was going to be a complete pushover under any US administration".

"I think there is a good chance we'll do something," he added.

Sir David Manning, a former British ambassador to the US, told Times Radio that Mr Biden "values the bi-lateral relationship" and said a strong relationship with Mr Johnson "should be possible" given the common interests between the longstanding allies.

Meanwhile, Mr Raab said that "in principle, yes, of course" all votes should be counted in a democratic election, having failed to make such a statement when Mr Trump had been calling for states to stop counting mail-in ballots last week.

Defending his own congratulatory tweet for saying there were "processes still playing out", the former Brexit secretary said it was "right to tread carefully and sensitively" after a fraught election but stated there had been a "definitive result".

Asked on Sky News' Sophy Ridge On Sunday whether he was fuelling conspiracists with his response, Mr Raab said: "No, I think that's a very partisan skew on it. The reality is we want to respect the integrity and processes in place.

"People complain about interference in our politics here – I think it is right to tread carefully and sensitively, particularly after what was clearly a very close election, far closer than the media or the pundits expected, and has been contentious in all sorts of ways."