Kamala Harris and Jill Biden: The women with the ear of the US president-elect 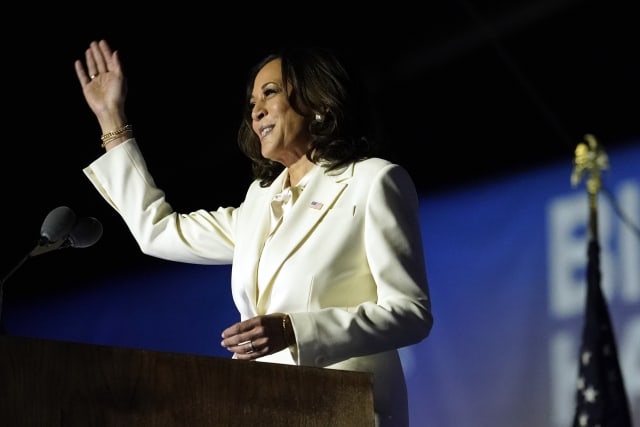 Two women will have the ear of the US president like never before, with Kamala Harris as vice-president and Dr Jill Biden as first lady.

Ms Harris is making history as the first female vice-president of the US, and paid tribute to the women who have paved the way for her during her victory speech.

The flotus-in-waiting, Dr Biden, has previously said she plans to continue teaching if she becomes first lady, and is also thought to be one of her husband’s closest confidantes.

Ms Harris will be known as madam vice-president, a role that “is no longer a fictional character”, as pointed out by Julia Louis-Dreyfus, who played vice president Selina Meyer in the HBO comedy Veep.

Addressing the nation, Ms Harris reflected on her mother, Shyamala Gopalan Harris, who went to the US from India at the age of 19.

She said her mother “believed so deeply in an America where a moment like this is possible”, adding: “So, I’m thinking about her and about the generations of women – black women, Asian, white, Latina and native American women throughout our nation’s history who have paved the way for this moment tonight.

“Women who fought and sacrificed so much for equality, liberty, and justice for all, including the black women, who are too often overlooked but so often prove that they are the backbone of our democracy.

“Tonight, I reflect on their struggle, their determination and the strength of their vision, to see what can be unburdened by what has been – I stand on their shoulders.

“And what a testament it is to Joe’s character that he had the audacity to break one of the most substantial barriers that exists in our country and select a woman as his vice-president.”

In his speech, Mr Biden said he would be “honoured” to be serving alongside Ms Harris and also paid tribute to how important his wife is to him.

“As I said many times before, I’m Jill’s husband,” he said, adding that he would not be where he is without the “love and tireless support” of her and their family.

“They are my heart. Jill’s a mom, a military mom, and an educator.

“She has dedicated her life to education, but teaching isn’t just what she does, it’s who she is.

“For America’s educators, this is a great day – you’re going to have one of your own in the White House, and Jill is going to make a great first lady,” he said.

Dr Biden, an educator of more than 30 years, earned a doctorate in education from the University of Delaware in 2007.

She also has two masters’ degrees which she completed while working and raising a family.

When she was second lady of the United States from 2009 to 2017 she continued to teach English full-time at a community college in Virginia, and she has previously said she planned to continue teaching if she became first lady.

As second lady, her work included bringing attention to the sacrifices made by military families, highlighting the importance of community colleges, and raising awareness around areas of particular importance to women, including breast cancer prevention.