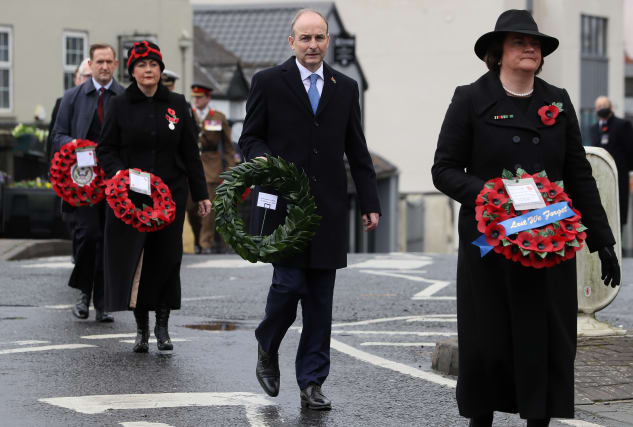 Micheal Martin became the third Taoiseach to attend the commemorative event in the Co Fermanagh town, following on from a traditional started by Enda Kenny and continued by his successor Leo Varadkar.

Mr Martin laid a laurel wreath at the war memorial on Sunday morning before standing in silence to pay his respects.

Northern Ireland’s First Minister Arlene Foster, a local Assembly member for the constituency, and Northern Ireland Office minister Robin Walker were among the other dignitaries to participate in the remembrance ceremony.

The event is usually attended by hundreds of local people but numbers were limited this year due to the Covid-19 pandemic.

It took place 33 years to the day since the IRA’s infamous “Poppy Day” bomb attack at the Enniskillen war memorial.

Eleven people who had gathered to pay respects to the war dead were killed and dozens more were injured in the no-warning blast in 1987 just minutes before the event was due to start. A 12th victim of the bombing died 13 years later having never woken from a coma.

Relatives of some of those killed attended Sunday-morning’s event.

Stephen Gault, whose father Samuel was murdered, said the smaller numbers in attendance made it more poignant.

“It’s hard to believe that on this exact day 33 years ago that my father and other 11 innocent people were brutally murdered at this site,” he said.

“It’s very poignant. It made it hit home. It was smaller numbers but it doesn’t take away from the day.”

“It was great the Taoiseach was able to come and carry on the tradition set a number of years ago,” he said.

“I personally think it’s greatly appreciated that he’s carried on that tradition, particularly as it’s a different Taoiseach this year from previous years.”

Mr Kenny became the first Taoiseach to attend a Remembrance Day service in Northern Ireland when he took part in commemorations at Enniskillen in 2012.

That move was symbolic of the greater recognition now afforded in the Republic of Ireland to those Irishmen who fought and died serving in the British Army in the First World War.

Other small-scale Remembrance Day events took place elsewhere in Northern Ireland on Sunday, including at the Cenotaph at Belfast City Hall, where Lord Mayor Frank McCoubrey led the commemorations.