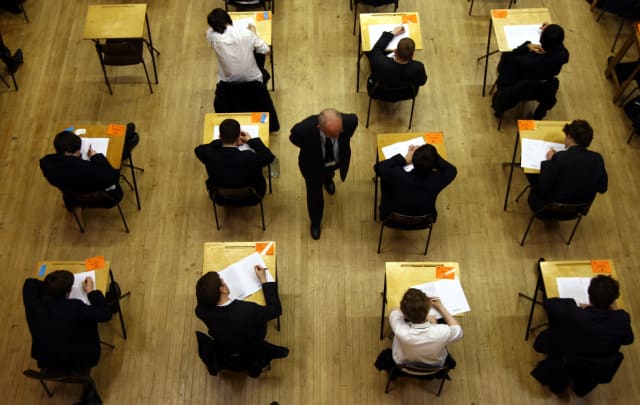 The Government should consider holding rigorous “backup” assessments rather than mock exams in case next year’s GCSE and A-level exams are cancelled amid the pandemic, a think tank has suggested.

Teacher-assessed grades should be avoided until there is more evidence about their reliability and their impact on the most disadvantaged students, according to a report by the Education Policy Institute (EPI).

The Government has said next year’s A-level and GCSE exams will go ahead in England, but most exams will be pushed back by three weeks to give pupils more time to catch up on their learning.

The Department for Education (DfE) has not yet announced contingency plans for the exams, but Ofqual has said it is preparing for all likely scenarios.

The EPI report calls on the Government to urgently set out a “backup plan” for next year’s exams in the event that the summer exam series is cancelled.

It says a new series of benchmarking assessments should be introduced to provide “contingency grades” if A-level and GCSE exams cannot take place.

These assessments – which would be set by exam boards and would be taken in the spring term – would replace existing mock exams to provide “greater consistency than traditional mocks,” the report says.

The recommendations come after the fiasco around grading of GCSE and A-level students this summer, when exams were cancelled amid the pandemic.

If the exams are able to go ahead, the think tank says the DfE should consider using greater optionality in exam papers so pupils have a better chance of answering questions on the content they have covered.

The report adds that some grade inflation should be allowed as the 2021 cohort will have experienced lost learning time and will be competing with the 2020 cohort for jobs, university and college places.

David Laws, executive chairman of the EPI, said: “There is a strong case for changes to exam papers, to enable pupils to be assessed on the content that they have actually covered this year.

“We also have to be prepared for a scenario in which next year’s exams cannot take place. To do that, the government should consider using more formal ‘contingency assessments’ in place of the usual mock exams, which students can then use as backup grades.

“It should avoid falling back on predicted grades again, as questions remain over their reliability.”

He added: “Pupils will face huge challenges to their education this year, so we must have a system that is fair. We cannot see a repeat of the turmoil that we had in the summer.”

Geoff Barton, general secretary of the Association of School and College Leaders (ASCL), said: “Unfortunately, we can detect no sense of urgency by either the government or the exam regulator to put in place any meaningful measures to make next summer’s exams fairer, or decide a backup plan if things go wrong.

“So far, they have slightly tweaked the content of the exams and delayed the start date by three weeks to allow for more teaching time, and they continue to talk about a Plan B without actually announcing one.

“It is important that the public understands how minor these measures are in comparison to the disruption to education which has taken place already because of the Covid pandemic and continues to do so as students have to intermittently self-isolate.”

An Ofqual spokeswoman: “We are continuing to discuss contingency options for all likely scenarios with school, college leaders and other stakeholders.

“We expect to provide advice to the government to enable it to determine and confirm contingency arrangements for 2021 with the sector this month.”

The exams regulator is also considering ways to make the prospect of exams “less daunting” for students who have missed out on  teaching and learning.

A DfE spokeswoman said: “Exams are the fairest way of judging a student’s performance, which is why they will go ahead next year, underpinned by contingency measures developed in partnership with the sector.

“Over the coming weeks we will jointly identify any risks to exams and the measures needed to address potential disruption, with fairness for students continuing to be our priority.”