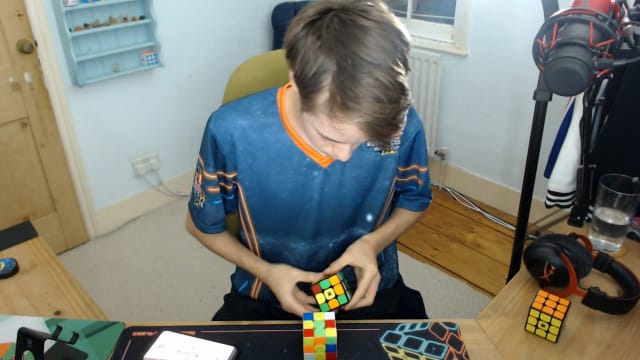 Chris Mills won the rescramble event at the Red Bull Rubik’s Cube World Cup on Saturday, which marked 40 years since the multi-coloured puzzle was first released.

Due to Covid restrictions, the tournament took place entirely online for the first time.

The event gives competitors a solved Cube and asks them to match the pattern on a randomly scrambled one.

Mr Mills managed this in just 17.6 seconds in the final round to beat his German opponent Ricky Meiler.

“That was one of my best solves ever, both in competition and at home,” said the part-time engineering student.

The $30,000 prize pot was shared between four competition tracks, with contestants going head to head from the safety of their own homes.

Max Park, an 18-year-old from the US, was named Red Bull Rubik’s Cube World Cup speedcubing champion, after winning the mixed final by solving a scrambled cube in just 5.9 seconds.

He defeated Australian Feliks Zemdegs, 24, a fellow star of the Netflix documentary The Speed Cubers.

“It was amazing that at a time of social distancing the speedcubing community could gather together and compete in such an exciting Red Bull Rubik’s Cube World Cup.

“It was fascinating too, to see that the speeds could be accurately measured to one-thousandth of a second.”

German Philipp Weyer took home the crown in the fastest hand event, which sees competitors using just one hand to solve a cube, registering times of between 11 and 13 seconds in the final.

The fastest solve in that event came in the semi-finals, when Russia’s Andrey Che recorded 8.5 seconds.

France’s Juliette Sebastien won the speedcubing female event, with a time of 6.9 seconds, and also came second in the mixed fastest hand event.