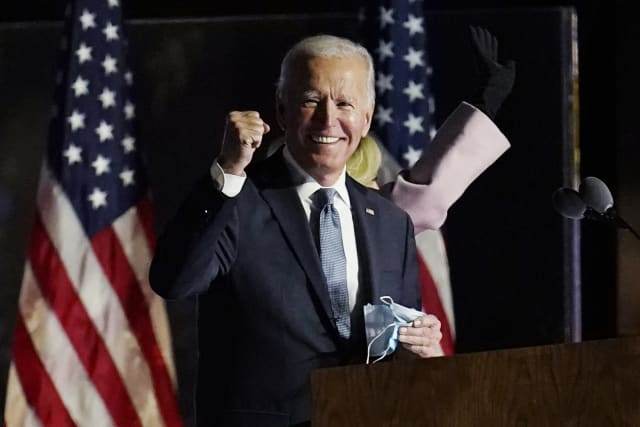 Joe Biden has promised to be a president for all Americans regardless of who they voted for as he defeated Donald Trump in the nail-biting race for the White House.

The former vice president clinched victory after winning the key battleground of Pennsylvania on Saturday – some four days after polls closed – pushing him over the 270 electoral college votes threshold.

Democratic candidate Mr Biden said he is “honoured” that America has “chosen me to lead our great country”, adding that it is time for the US to “unite” and “heal”.

A little earlier, Mr Trump, who has yet to concede, left the White House to play golf.

Prime Minister Boris Johnson congratulated Mr Biden and vice president-elect Kamala Harris, adding: “The US is our most important ally and I look forward to working closely together on our shared priorities, from climate change to trade and security.”

Foreign Secretary Dominic Raab also congratulated the victors, adding that it was a close contest and Mr Trump “fought hard”.

Mr Biden, who is expected to address the nation at around 1am UK time, said on Twitter: “The work ahead of us will be hard, but I promise you this: I will be a President for all Americans – whether you voted for me or not.”

In a statement, he said he is “honoured and humbled” by the trust the American people have placed in him and Ms Harris.

“In the face of unprecedented obstacles, a record number of Americans voted. Proving once again, that democracy beats deep in the heart of America.

“With the campaign over, it’s time to put the anger and the harsh rhetoric behind us and come together as a nation.

“It’s time for America to unite. And to heal.

“We are the United States of America. And there’s nothing we can’t do, if we do it together,” he said.

Former president Barack Obama said he “could not be prouder” to congratulate Mr Biden and Ms Harris, saying: “We’re fortunate that Joe’s got what it takes to be president and already carries himself that way.

“Because when he walks into the White House in January, he’ll face a series of extraordinary challenges no incoming president ever has – a raging pandemic, an unequal economy and justice system, a democracy at risk, and a climate in peril.

“I know he’ll do the job with the best interests of every American at heart, whether or not he had their vote.”

Former Democratic presidential nominee Hillary Clinton hailed Mr Biden and Ms Harris as “a history-making ticket, a repudiation of Trump, and a new page for America”.

Meanwhile, Mr Trump said in a statement he considers the election “far from over” as he repeated unsubstantiated claims of fraudulent ballots and vowed to press ahead with legal action.

He said: “We all know why Joe Biden is rushing to falsely pose as the winner and why his media allies are trying so hard to help him: they don’t want the truth to be exposed. The simple fact is this election is far from over.”

Mr Trump added: “Beginning (on) Monday, our campaign will start prosecuting our case in court to ensure election laws are fully upheld and the rightful winner is seated.”

Mr Trump posted a number of tweets on Saturday, alleging that “bad things” happened, referring to votes being “illegally received” and insisting he has won “by a lot”.

But Federal Election Commission commissioner Ellen Weintraub said there has been no evidence of voter fraud.

Speaking on CNN after Mr Trump’s string of tweets – which were flagged by Twitter as containing information about the election that may be “misleading” – Democrat Ms Weintraub said: “State and local officials, and poll workers throughout the country, really stepped up.

“And there have been very few complaints about how this election has run.

“Very few substantiated complaints, let me put it that way. There is no evidence of any kind of voter fraud.

“There is no evidence of illegal votes being cast.”

Her comments came after Mr Trump wrote on Twitter that tens of thousands of votes were “illegally received” after 8pm on Tuesday “totally and easily changing the results in Pennsylvania and certain other razor thin states”.

He later tweeted: “I WON THIS ELECTION, BY A LOT!”