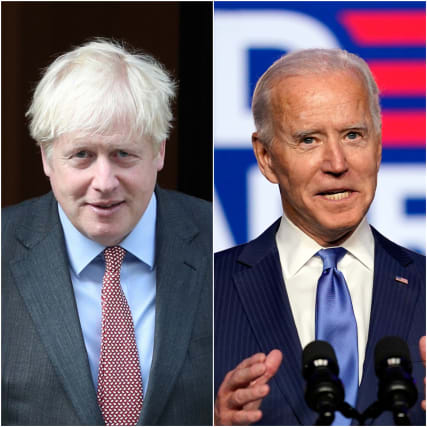 Boris Johnson has congratulated US president-elect Joe Biden and said he looks “forward to working closely together” as allies.

Former vice president Mr Biden was called as the winner of Pennsylvania and Nevada on Saturday, giving him an insurmountable lead in the race for the White House against incumbent Donald Trump.

The Prime Minister tweeted: “Congratulations to Joe Biden on his election as President of the United States and to Kamala Harris on her historic achievement.

“The US is our most important ally and I look forward to working closely together on our shared priorities, from climate change to trade and security.”

His social media message was closely followed by Foreign Secretary Dominic Raab, who tweeted: “It was a close contest and Donald Trump fought hard.

“Looking forward to working with the new administration – the UK-US friendship has always been a force for good in the world.”

Downing Street has played up Britain’s ties with the US under the Trump administration, with Mr Johnson keen to strike a cross-Atlantic trade deal after Brexit.

Number 10 confirmed this week that the Prime Minister has not met Mr Biden, with British efforts to get close to the Democrat candidate reportedly rebuffed during the election due to a campaign decision not to meet with foreign dignitaries.

SNP Westminster leader Ian Blackford called on Mr Johnson to “reflect” on his own style of politics following the projected defeat of Mr Trump, who was a vocal supporter of Brexit.

After congratulating Mr Biden and his running mate Kamala Harris, who is set to be the first female vice president, on their election victory, Mr Blackford said on Twitter: “The Prime Minister must arrange an early call with President-elect Biden to officially acknowledge this result and congratulate him on an historic achievement.

“In the UK, Boris Johnson must reflect on his own reputation as ‘Britain Trump’.

“His extreme Brexit policies, and decision to align himself so closely with the narrow politics of Donald Trump have left the Tory Prime Minister increasingly isolated on the world stage.”

Opposition leader Sir Keir Starmer was one of the first high-profile domestic figures to congratulate Mr Biden, praising his campaign for “decency, integrity, compassion and strength”.

He predicted the win would see the US play a more central role on the world stage once again.

“Their victory is one for hope and unity over dishonesty and division,” said the Labour leader in a statement.

“This is also an important moment for the world. It is a chance to reassert America’s place as a force for good on the world stage.

“A nation that will work with Britain and other allies to defeat this pandemic and fight climate change.

“I am looking forward to building on this and forging an even stronger relationship between the UK and the USA.”

On the world stage, European leaders were among those heralding Mr Biden.

“We have a lot to do to overcome today’s challenges. Let’s work together!”