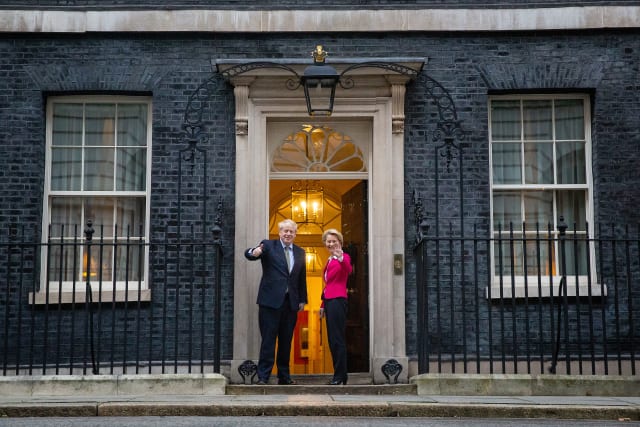 Ireland’s Europe minister said he was not expecting a telephone conversation between Boris Johnson and his European Commission counterpart to result in a breakthrough in the post-Brexit trade talks.

Downing Street confirmed the Prime Minister was due to speak to commission president Ursula von der Leyen to “take stock” of the deadlocked trade talk negotiations on Saturday.

Briefings between the two leaders are seen as key moments in the cross-Channel bartering, with their conversation last month seeing discussions “intensified” before a fallout after the European Council meeting on October 15 briefly derailed the negotiations.

But Ireland’s Europe minister Thomas Byrne said he doubted the conversation between Mr Johnson and Ms von der Leyen would lead to white smoke on agreeing a deal, with “big issues” still remaining in talks that he described as having been “difficult”.

“I personally don’t expect that there would be major progress today but at the same time I think it is very good that the top two are talking – I think that’s really positive, but I don’t think we would expect ‘a moment’ at this particular point,” he told BBC Radio 4’s Today programme.

“At the moment there is a huge range of issues that need to be discussed at a technical level and they need to continue, I hope.

“I hope that today’s discussion between Ursula von der Leyen and Boris Johnson will progress that further.”

UK chief negotiator Lord Frost was in the Belgian capital to speak face-to-face with his European Union counterpart Michel Barnier earlier this week.

Meetings between the pair are due to continue next week in London after both agreed there continued to be gaps in the UK and the bloc’s positions as the deadline for doing a deal edges closer.

After talks finished on Wednesday, Mr Barnier briefed MEPs and EU diplomats that “very serious divergences” remained, with only 54 days left until the end of the transition period.

He said the main stumbling blocks continued to be around the “level playing field” aimed at preventing unfair competition on areas including state subsidies, fisheries policy and the governance of any deal.

Lord Frost previously said progress had been made during two weeks of intensive talks but “wide divergences remain on some core issues”.

With discussions planned between London and Brussels, attention has turned to how a Joe Biden presidency in the US would impact Brexit as the Democratic candidate looked to be on the cusp of the White House.

Former British ambassador to the US Lord Kim Darroch, who was forced to quit after his scathing comments about President Donald Trump were leaked, said the “big risk” to Johnson-Biden relations was the impact of no-deal on Ireland and any resulting fallout in Washington.

He told BBC Breakfast: “We don’t start from a perfect place because Biden is on record as not being a fan of Brexit and he has been less than complimentary about our Prime Minister.

“All that said, it is not impossible still to have a very constructive relationship.”

Sir Christopher Meyer, another former UK ambassador to the US, said the UK relationship with Capitol Hill would need “repairing” after the introduction of the Internal Market Bill, which the Government has admitted would break international law.

The draft legislation would override key clauses of the Withdrawal Agreement, with the EU pursuing legal action.

Speaking to Times Radio, he said: “I think one of the great mistakes that this Government has made through the voice of Brandon Lewis, Northern Ireland Secretary, in the House of Commons was to suggest that we were going to break international law.

“And that has translated in Washington DC to an inflaming of opinion among the Irish-American lobby, who you do not mess with.

“So that certainly needs some massaging and repairing.”