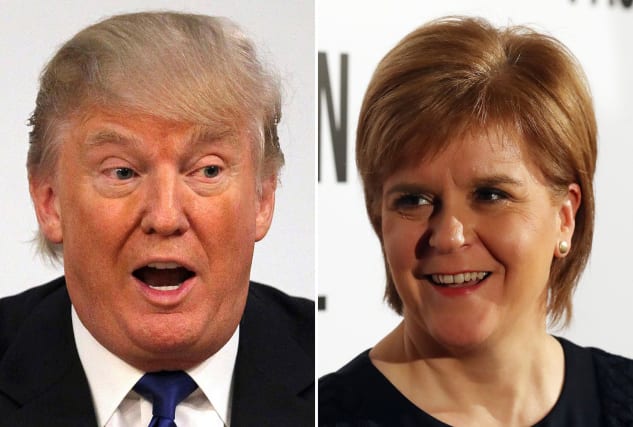 Scotland’s First Minister has congratulated Joe Biden and Kamala Harris on their projected victory in the US election as the Westminster leader of her party said Boris Johnson must now reflect on his reputation as “Britain Trump”.

Mr Biden was called as the winner of Pennsylvania on Saturday, taking him over the 270 electoral college votes needed for the Democrat to unseat Donald Trump.

His running Kamala Harris is poised to be the first female, black, and Indian-American vice president.

The SNP leader added: “The first woman in the White House – and the first woman of colour too. This is a big and special moment.”

Meanwhile, the SNP Westminster leader Ian Blackford called for Prime Minister Mr Johnson to call Mr Biden to acknowledge the result, after Mr Trump made a series of unsubstantiated allegations to claim he is being cheated out of re-election.

Mr Blackford said: “I warmly congratulate Joe Biden and Kamala Harris on their election victory, which gives great hope to progressives in Scotland and around the world.”

“Scotland has a long and enduring friendship with the United States. I am delighted that the American people have chosen fairness, equality, and decency at this crucial election.

“The United States has an important role to play in tackling the shared global challenges of coronavirus, climate change, poverty, and inequality. The renewed commitment on these issues from Joe Biden is one that is strongly welcomed and shared by Scotland.

“The integrity of democracy demands this result is recognised in America and internationally. The Prime Minister must now arrange an early call with President-elect Biden to officially acknowledge this result and congratulate him on an historic achievement.

“Boris Johnson must also reflect on his own reputation as ‘Britain Trump’. His extreme Brexit policies, and his decision to align himself so closely with the narrow politics of Donald Trump, have left the Tory Prime Minister increasingly isolated on the world stage.”