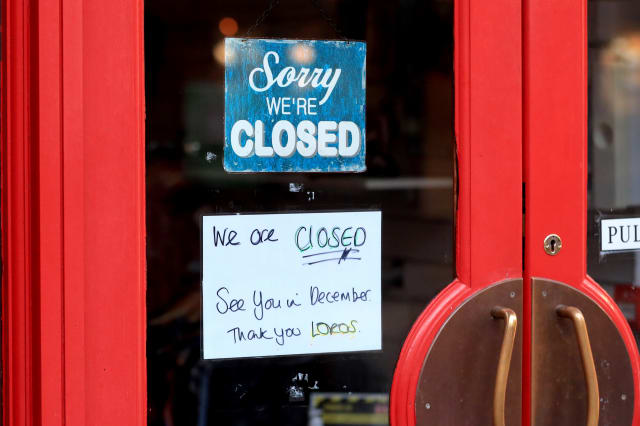 The country needed “dramatic action” to reduce Covid-19 transmission, despite the Government’s “ghastly” presentation of data to justify the latest lockdown, according to an expert.

Professor Sir David Spiegelhalter said it would not be sustainable for the health service to deal with the levels of coronavirus cases and hospitalisations without tougher measures than those imposed under the three-tier system.

He was critical of the data shared with the public to justify a second lockdown in England, calling the information shown at last Saturday’s press conference suggesting a possible peak of 4,000 deaths a day a “mess”.

Sir David, statistician and chair of the Winton Centre for risk and evidence communication at the University of Cambridge, told BBC Radio’s 4 Today programme: “The infections are really broadly stable… but that stability covers up two things.

“It looks like the tiers have been working but slowly, and it looks like not enough really to bring R down well below 1 and, crucially, to bring down the number of people who have actually got it.

“The point is we are getting about 20-25,000 positive tests a day, that feeds through to about 1,500 hospitalisations a day, about 250-300 deaths a day and these are broadly stable but going up a bit – the deaths in hospitals and hospitalisations are going up slowly – and we are coming into winter.

“Those sorts of levels, even if they stay very stable and below the first peak of the virus, unless they start dropping, we are stuck with those for months and it seems to me and others that that’s not going to be sustainable in terms of what the health service can deal with.”

Reflecting on the presentation of data at the press conference last weekend in which the Prime Minister announced the new lockdown, Sir David said: “It has been a mess, it really has.

“All those graphs that got put up at the press conference last Saturday, the projections were out of date at the time, they’re definitely out of date now.

“That one (the slide about 4,000 deaths) was really ghastly – that was out of date when shown. It was never meant to be part of any formal document, it was leaked early and then it was part of the briefing to MPs.”

Sir David said projections did have some “validity” but need to be “taken with extreme caution” because they could often be out of date by the time they are shown.

Meanwhile, hundreds of people have been tested as part of a pilot mass coronavirus testing programme in Liverpool, with queues outside new test centres.

The armed forces have been brought in to the city to help deliver the scheme, which uses lateral flow tests to deliver results in under an hour for people who are not showing symptoms of the virus.

Mr Johnson has said the rapid testing pilot could be a “real way forward through the crisis”.

But health experts said plans to screen the population of Liverpool were not fit for purpose.

A group of academics said the potential for “harmful diversion of resources and public money is vast”, and warned the half-a-billion-pound project could be a “costly failure”.

The Government is expected to announce on Saturday that the blanket provisions allowing all pubs in England to serve takeaway food and drink will be extended, while Ronnie Scott’s Jazz Club and The Lowry in Salford are among eight cultural organisations and venues which will benefit from the latest round of coronavirus funding.

New data shows the rate of infections across England and Wales appears to be slowing down.

But while the infection rate has increased in recent weeks, “the rate of increase is less steep compared with previous weeks”, the ONS said.

After Denmark was removed from the Government’s list of travel corridors due to widespread outbreaks of Covid-19 in its mink farms, the Government has announced it is also imposing immigration powers against foreign visitors from the country.

From 4am on Saturday, all non-British national or resident travellers who have been in or transited through Denmark in the last 14 days will be denied entry into the UK.

The Government also said it is expanding the self-isolation requirements for Denmark.

British nationals or residents who are returning to the UK either directly or indirectly from the country are now required to self-isolate along with all other members of their household, until two weeks have passed since they were last there.

A further 355 people had died within 28 days of testing positive for Covid-19 as of Friday, according to Government figures.

There were also a further 23,287 lab-confirmed cases of coronavirus in the UK as of 9am.

A total of 64,170 deaths involving Covid-19 have now occurred in the UK, according to figures produced by statistical agencies.