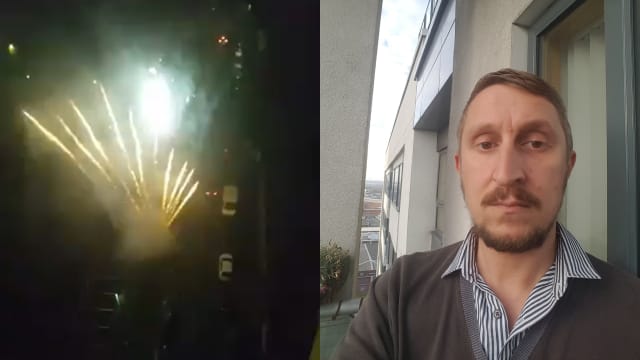 Residents were left “on a knife edge” after fireworks were let off outside their block of flats on Bonfire Night, shortly after they had been told they had combustible cladding on the building.

Video posted on social media on November 5 showed a number of fireworks exploding next to Britton House in Manchester having been set off on a nearby road.

A group of residents have formed an action group in response to fire concerns, which condemned the “unbelievable stupidity” of those responsible for the fireworks.

“Fireworks set off on the road as traffic tries to pass next to our building with flammable cladding & insulation! Terrifying!” read a tweet from the Britton House Cladding Action Group.

“For the last two or three nights all night long from 6pm until midnight they’ve just been letting huge fireworks off in the road,” said Stephen Squires, 43, a resident in the building.

“These are big fireworks that are flying off in all directions, and when it’s literally so close to the building, which is 19 stories high, the fear is if something goes off in the wrong direction and sort of embeds itself in the cladding and it starts a fire and it starts to spread across the building.

“Honestly, last night – not just me – lots of people in the building were on a knife edge every time you hear the bangs.”

Fears over cladding in a number of tower blocks have been raised since Grenfell Tower in west London caught fire in June 2017, claiming 72 lives.

Aluminium composite material cladding has been blamed for the scale of the tragedy.

Mr Squires said he called the non-emergency 101 number for the police but spent an hour in the queue to no avail.

“I know it’s a busy night for the fire service and the police, but they should have had extra resources in place,” he said.

“It’s just not acceptable that you’ve got people letting fireworks off in such close proximity to homes.”

Mr Squires said that the residents in the building are paying for fire marshals to patrol the building as a result of the recent report.

The fireworks, which were let off “yards from the building” according to Mr Squires, exploded above a road upon which traffic was moving.

There were a number of examples on social media of fireworks being let off in built-up areas on Bonfire Night.

One video filmed in east London showed a large explosion from a firework outside a number of flats as people stood on the pavement.