Michael Stone eligible to apply for release from prison 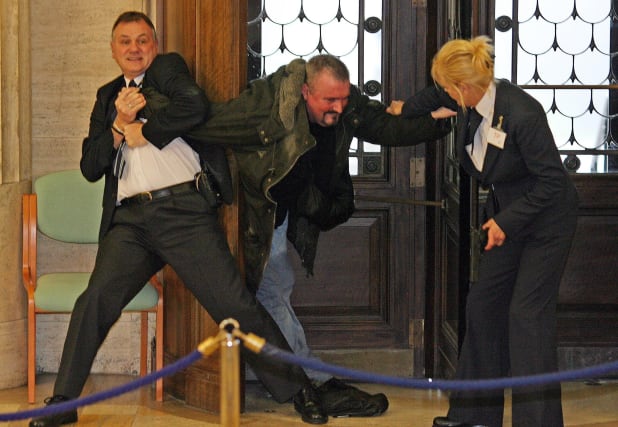 It said keeping the notorious paramilitary behind bars until at least 2024 would “constitute an interference with the physical liberty of the prisoner and could only arise under clear authority of the law”, and in its view this could not be implied.

In 1988, Stone killed three people in a gun and grenade attack at Milltown Cemetery in Belfast.

Stone was freed early from prison in 2000 under the terms of the Good Friday Agreement.

He was sent back six years later after attempting to attack Sinn Fein politicians at Stormont.

Stone is serving a 30-year jail term. The issue under consideration was whether he would stay in jail until at least 2024, or whether his minimum tariff expired in 2018, including the six years he was freed under licence.

Stone launched an appeal against efforts to keep him in prison.

One of his victims was 20-year-old Thomas McErlean. His sister, Deborah McGuinness, had taken legal action in a bid to attempt her brother’s killer from applying for early release.

A statement on behalf of the Court of Appeal said: “The Court considered that the decision of the High Court effectively rewrote the statute.

“It recognised that the arrangements in relation to Troubles-related prisoners have been a source of considerable concern to many within this community but said those arrangements are unique and extraordinary.

“They were the outcome of a political process supported by a referendum. They undoubtedly produced a windfall for the prisoners affected.

“The merits of the provision of that windfall are not for this court to determine.”

The court was satisfied that interpreting the words of the statute in their context led to the conclusion that the period that the prisoner spent lawfully on licence ought to be included in the relevant part of his sentence.

It allowed the appeals.

The court said there was no reason to suppose that Parliament failed to take into account that there were periods of lawful release when making the Northern Ireland Act 1998 which laid out sentencing policy.

It found that if they were not excluded they would contribute to the prisoner serving the relevant part of his sentence.

The court said it was “plainly open” to Parliament to have provided for the exclusion of the licence period as a relevant period in fulfilment of the tariff.