Every vote in US election must be counted, Irish premier says 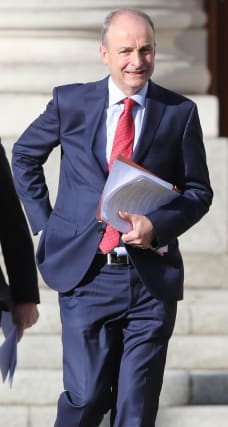 The Irish premier has said that every vote in the US presidential race should be counted.

Micheal Martin described the US election process as “well organised”, adding that officials are ensuring the integrity of the vote.

The Taoiseach made the comments as Joe Biden edged closure to victory.

The Democratic challenger surpassed Donald Trump, who is mounting legal challenges over allegations of fraud.

Mr Martin said that every vote in the election has to be counted.

“I’ve watched over the last number of days, it’s very clear that the various administrators and various states are doing everything they can to protect the integrity of the vote to make sure every citizen’s vote is counted and that’s the way it should be,” Mr Martin said.

“Despite all of what is being said, I think that is coming through to any audience watching this, that this is well organised and attention is being paid to detail, and people have a route to redress if people feel they have issues.”

“I think it is worth watching and it’s very important that, as broadcasters have stressed, the need to count every vote and make every vote count.”

Mr Martin said the American people have wanted to have their say.

“They came out in large numbers, those who have voted on election day and because of the coronavirus, it was a very wise way of organising the election in the manner in which it was organised,” he added.

Paschal Donohoe said it had been a “dramatic” week in US politics and there was always an invitation open to the sitting US president to visit Ireland.

“There is always an invitation open from the Government of Ireland to the president of America,” he said.

“Let every vote be counted and the Irish Government will then work with the new president.”

He said he agreed with Tourism Minister Catherine Martin that “words matter in politics”.

Ms Martin said the tone of unity being espoused in US candidate Joe Biden’s speeches this week was “refreshing” and “badly needed” at present.

“The most important thing is that we respect democracy and we’ll see how it plays out,” Ms Martin said.

“It is a very exciting few days.”

Deputy leader of the Green Party Ms Martin added: “I find it refreshing the tone that Joe Biden is striking in his speeches this week.

“It is something that has been missing on the international stage and I welcome that tone of unity that I feel is so badly needed at the minute.”