Boy, 17, sentenced to detention for preparing neo-Nazi acts of terrorism 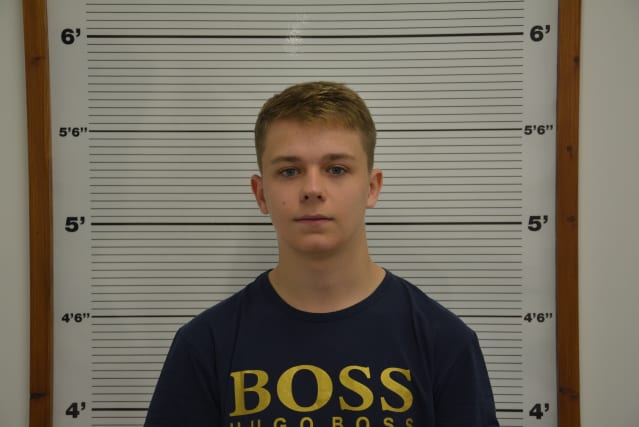 A 17-year-old boy has been sentenced to five-and-a-half years detention for preparing for acts of neo-Nazi terrorism after researching how to turn a blank-firing gun into a live weapon.

Paul Dunleavy, who can now be identified after legal restrictions were lifted, told police he was “a nine to 10” on a scale of the extreme right-wing, with “full-on Nazi Hitler” as a 10.

He sent how-to manuals and gave advice on building viable guns to other far-right extremists – including one who later planted a bomb.

The teenager had also told other neo-Nazi members of a chat group, part of the now banned terrorist group Feuerkrieg Division (FKD), of wanting to build a gun capable of “smashing heads”.

Knives, bullet casings, shotgun cartridges, a mask featuring a skull and a home-made gun stock were among items found in the teenager’s bedroom, along with sketches of swastikas and firearms.

The boy had also praised the terrorist who killed 51 people at two mosques in Christchurch, New Zealand, last year.

Dunleavy was unanimously convicted by a Birmingham Crown Court jury last month of preparing for terrorist acts between April and September 2019.

The youngster, described by a judge as “socially-isolated”, previously admitted nine counts of having documents useful to a terrorist, relating to building “homemade firearms”.

Sentencing Dunleavy at the court on Friday, Judge Paul Farrer QC accepted the boy’s autism had led to “an obsessional interest in firearms”.

He added an episode in Dunleavy’s past could have led to “feelings of social isolation”.

He said Dunleavy had then “retreated into an online world” and “sought out and read extremist right-wing literature”.

“In that world, you adopted radical right-wing views,” the judge said.

Dunleavy was a member of various chat groups, including the FKD and administrator for another called the League of Nationalists.

The judge said the groups were “inherently racist”, adding: “Your conduct was entirely rooted in your extreme right-wing ideology.”

The youth, of Morris Close in Rugby, Warwickshire, told the court he had not intended any act of terrorism and “had existed in an echo chamber” of far-right chat rooms, including another Wire chat called FKD_GB.

But Dunleavy used racist and Anti-Semitic slurs in chats and referred to “Muslim and Pakistani degenerates”.

Unknown to that chatroom’s contributors one of their number was an undercover law enforcement officer, whose evidence was critical in Dunleavy’s prosecution.

During the chats, Dunleavy repeatedly offered what the judge called “significant advice and encouragement” to members, three of whom the court heard had since been convicted of terrorist offences in Germany, Lithuania and the United States.

Judge Farrer said: “You knew you were communicating with extreme right-wing individuals who harboured terrorist intentions.

“In these circumstances you repeatedly offered practical advice on the construction of improvised firearms.”

That same day, a member of the chat, by the name of “EksD”, posted an image of a partly-assembled homemade rifle and asked for help.

Dunleavy responded with advice on how the individual could build a functioning barrel.

The judge said: “That individual has since been convicted of serious terrorist offence in Lithuania which involved the placing of an explosive device outside a building operated by Western Union.”

A week later Dunleavy suggested another chat member start building “a simple improvised shotgun”, but left in August to clear his online presence and get his “own operations off the ground”.

The judge said he accepted much of what Dunleavy said was “bravado and exaggeration” and his plans “were at a very early stage and largely inept”.

He added, however, there was “a real risk” someone would have acted on his encouragement and put “multiple lives” in danger.