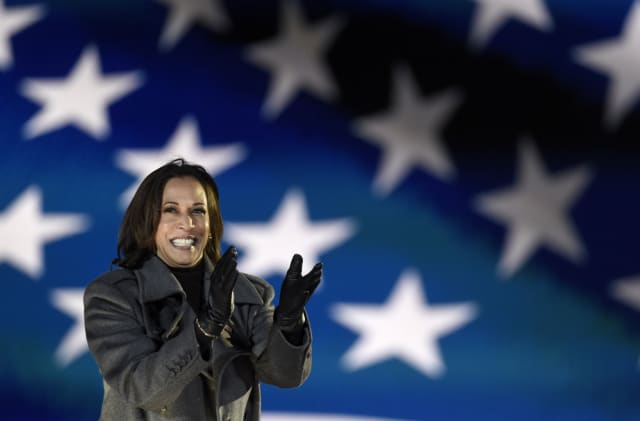 A trailblazer throughout her career, Kamala Harris is on the brink of making history as the first female, black, and Indian-American vice president.

Democratic candidate Joe Biden’s running mate is one of the party’s most prominent figures and launched her own bid to become president last year.

But the early promise of Ms Harris’s campaign faded and she pulled out of the race for the White House, instead endorsing her former rival Mr Biden.

He named the California senator as his running mate in the summer, making history by selecting the first black woman to compete on a major party’s presidential ticket.

Born in 1964 in Oakland, California, to a Jamaican-born father and Indian-born mother, Ms Harris said she was inspired to fight injustice by her mother, who was an activist and researcher.

After studying at Howard University and then for a law degree at the University of California, she began her career in the Alameda County District Attorney’s Office.

She won her first election in 2003 when she became San Francisco’s district attorney and, when elected California’s attorney general in 2010, she was the first woman and black person to hold the job.

After being elected to the Senate in 2016, she quickly gained attention for her assertive questioning of Trump administration officials during congressional hearings.

The 56-year-old launched her presidential campaign in early 2019 with the slogan “Kamala Harris For the People,” a reference to her courtroom work.

She was one of the highest-profile contenders in a crowded Democratic primary and attracted 20,000 people to her first campaign rally in Oakland.

Facing fundraising problems, Ms Harris abruptly withdrew from the race in December 2019, two months before the first votes of the primary were cast.

After choosing Ms Harris as his running mate in August this year, Mr Biden praised her as “smart, she’s tough, she’s experienced, she’s a proven fighter for the backbone of this country”.

“Kamala knows how to govern. She knows how to make the hard calls. She’s ready to do this job on day one,” he said.

Singer-songwriter John Legend was among the famous faces to praise the former vice president for his decision.

Ms Harris lives in Los Angeles with her husband, entertainment lawyer Doug Emhoff, who has frequently joined her on the campaign trail, and is stepmother to his children Ella and Cole.