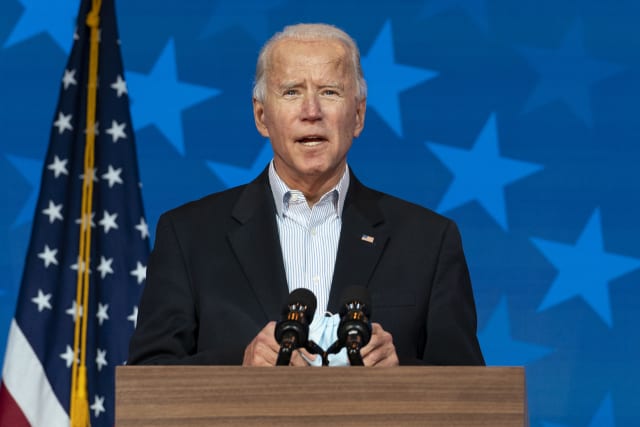 Joe Biden looked on the cusp of becoming the 46th president of the United States as his campaign threatened to remove “trespassers” following Donald Trump’s defiance at the developing picture.

Democratic candidate Mr Biden is preparing to address the nation after he took the lead in the key battleground states of Pennsylvania and Georgia in what could prove to be decisive moments in a fraught election.

In a further indication that the country is preparing for a change of personnel at the White House, CNN reported that “national defence airspace” had been cleared above Mr Biden’s home and his secret service detail was being expanded.

But Mr Trump signalled he would not go quietly from the Oval Office, warning his rival off declaring victory in a speech due to be delivered on Friday evening in the US.

He tweeted: “Joe Biden should not wrongfully claim the office of the president. I could make that claim also. Legal proceedings are just now beginning!

“I had such a big lead in all of these states late into election night, only to see the leads miraculously disappear as the days went by. Perhaps these leads will return as our legal proceedings move forward!”

The Biden campaign has refrained from declaring a win but was forthright in its reply to an earlier outburst by Mr Trump, in which he made unsubstantiated claims about “illegal ballots” in the election.

“As we said on July 19, the American people will decide this election,” the campaign said in a statement.

“And the United States Government is perfectly capable of escorting trespassers out of the White House.”

Prime Minister Boris Johnson continued to say he has “every confidence” in the checks and balances of the American constitution and said he would “work closely with whoever is the president” but declined to comment further.

With forecasters putting him just one state from victory, Mr Biden surpassed the president in swing states on Friday as officials continued counting votes.

The former vice president overhauled the Republican incumbent’s leads by more than 9,000 votes in Pennsylvania and 4,235 in Georgia, where a recount has been ordered.

Counters could also be redeployed in Pennsylvania where a recount is expected under state law if there is less than half a percentage point between the two candidates.

Mr Trump, who is mounting legal challenges to improve his chances of re-election amid baseless allegations of fraud, has to win both of those states if he is to stay in contention.

Georgia, which the president won by more than 200,000 votes in 2016, has not been won by the Democrats since 1992. Pennsylvania, Mr Biden’s birth state, was narrowly seized from the Democrats by Mr Trump in the last election.

Secretary of state in Georgia Brad Raffensperger confirmed there would be a recount “with a margin that small”.

“The stakes are high and emotions are high on all sides. We will not let those debates distract us from our work, we will get it right and we will defend the integrity of our elections,” the Republican said.

Victory in Pennsylvania, where around 5% of ballots still need counting, would hand the presidency to Mr Biden with its 20 votes.

Georgia, with 16 electoral votes, is a more complicated scenario.

Not everyone agrees that Mr Biden has beyond all probability won in Arizona, and without that Georgia would leave him one vote short of overall victory.

He has secured victories in the battleground states of Wisconsin and Michigan, but Nevada and North Carolina also remain too close to call after Tuesday’s election.

The Trump campaign requested a recount in Wisconsin and filed lawsuits in Pennsylvania, Michigan and Georgia.

But judges in Michigan and Georgia dismissed the actions launched by the Trump campaign. Additional legal action was also expected in Nevada, the campaign indicated.

The Associated Press news agency, which PA relies on to call states, has projected Mr Biden as winning Arizona and its 11 electoral college votes.

That looks likely as he has a strong lead with more than 90% of the votes tallied but Mr Trump’s campaign disagrees and other news organisations are not so certain.

The appearance of Mr Biden coming back from behind is an artificial one. Many of the outstanding ballots are postal votes and absentee ballots which are being added to the tally later than their in-person counterparts.