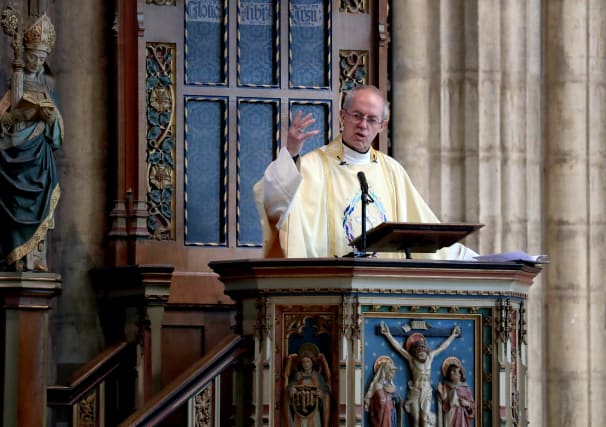 The Archbishop of Canterbury has said he thinks the ban on religious services will “probably change before too long”.

Churches in England can remain open during the four-week lockdown which began on Thursday, but only for private prayer and small funerals.

Justin Welby is among a host of faith leaders who have written to Boris Johnson to ask that the decision to bar all other services is reversed.

Downing Street has said there is “no change” planned for the lockdown regulations relating to religious services.

But on Friday the Archbishop insisted churches are “the safest places you go to”, with people wearing masks and well spread out.

He told Good Morning Britain: “They come together, they worship, they get the strength to serve and love their neighbours, and the church is doing phenomenal stuff in the country in service of Jesus Christ, to show the love that God has for us and, ahead of Christmas, it’s needed even more.

“So we all wrote to the Government – we’re not going to have a great big row with them – and said we disagree with you about the need to close churches.

“This is one of the things that holds people together. It gives them a real sense of purpose and changes the world. So, I think that’ll probably change before too long.

His words echo those of Cardinal Vincent Nichols, the leader of the Catholic Church in England and Wales, who has said churches are “among the safest places” people can visit.

He said the ban on religious services during lockdown is “not supported” by scientific evidence, and has predicted a U-turn.

Senior clergy members say they were not consulted about the restrictions.

Downing Street has previously said “it wasn’t possible to go any further than” allowing private prayer as there was a risk large gatherings inside places of worship could increase the spread of the deadly virus.

Mr Johnson’s spokesman has indicated that the evidence for the decision to halt religious services will not be published.