Up to 700 manufacturing jobs to go in Northern Ireland 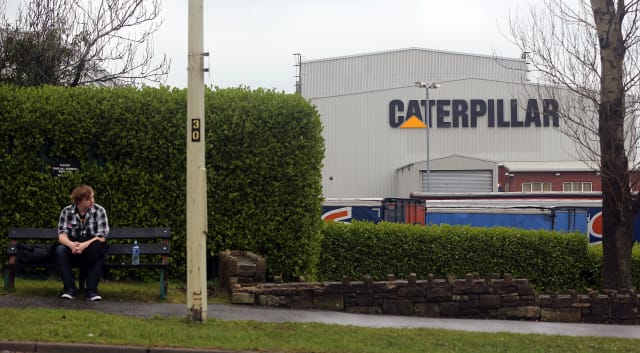 Up to 700 manufacturing workers are in line to lose their jobs in Northern Ireland.

Some roles at Caterpillar in the Co Antrim town of Larne may be outsourced to India and employees’ representatives dubbed it a “scandalous profit grab” at the expense of local staff.

Unite the union’s George Brash said some people had spent 30 years with the generator-building firm.

He said: “They are absolutely devastated that in the midst of a pandemic what we are looking at is jobs lost in the mouth of Christmas.”

The process is expected to be completed within 18 months and is designed to ensure the competitive future of the multinational firm.

The announcement is part of the company’s plans to better utilise existing capacity and improve cost competitiveness.

Managers said the proposal was unrelated to Brexit or Covid-19.

Mr Brash said: “That is families, that is Larne, that is the wider community that is going to take a hit.

“They are angry that potentially jobs could be outsourced to foreign countries.”

The union’s regional officer said the workforce was highly skilled and motivated and added it would be unacceptable if some of the positions were moved to India.

He hoped there would be opportunities for redeployment or alternative work.

“They are on a slippery slope when there are 700 jobs at risk.

“The fear for the workers is that this is just the first of other announcements.”

Larne is a port town and major industrial base in East Antrim.

Northern Ireland has lost a host of manufacturing jobs in recent years including a major tyre manufacturer in the wider Co Antrim area.

Co Antrim’s Wrightbus, the firm which built London’s doubledecker Routemaster buses, was saved from liquidation this time last year with some 1,200 jobs hanging in the balance.

“To take 700 workers out of this small, average-sized town of Larne will have a huge impact, that is undoubtedly the case and there are a lot of people really fearful about what the future will bring in terms of that.”

Caterpillar is an Illinois-based heavy machinery maker working in areas like mining.

Its manufacturing facility in Springvale in Belfast will not be affected by the job cuts.

The total number of employees in Northern Ireland is currently about 1,600.

Joe Creed, vice president of Caterpillar’s electric power division, said: “We recognise that what we are considering is difficult for our employees, their families and the community.

“We do not take these contemplations lightly; however, we must plan for future business needs to be competitive.”

Mayor of Mid and East Antrim council, Councillor Peter Johnston, said they were working closely with the firm and would do everything they could to support those affected.

“Caterpillar is a major employer within our local economy, and is a giant of our manufacturing sector.

“The wider economic benefit it provides is hugely significant, including the supply chain.”