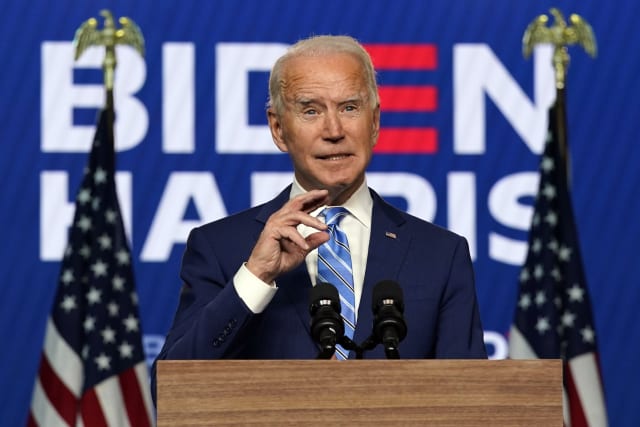 The US election had still not been called by the time markets closed on Thursday evening but with Joe Biden edging ahead, investors remained bullish.

They were helped along by the Bank of England injecting an extra £150 billion into the economy through quantitative easing and holding interest rates at record lows of 0.1%.

Connor Campbell, financial analyst at SpreadEx, said: “Investors showed no fear of jinxing the election result on Thursday, continuing to full-force barrel into equities on the assumption that Joe Biden will be POTUS come January.

“As they did on Tuesday and Wednesday, the markets have used the likelihood of a Biden presidency, even if it isn’t accompanied by the anticipated ‘blue wave’, as an excuse to drag themselves out of the Covid-shaped hole they found themselves in by the end of October.”

The pound strengthened against the dollar, hitting 1.3097 dollars as markets closed – up from 1.298 from the same time on Wednesday evening.

In company news, the resumption of a dividend and massive cost cutting at Sainsbury’s failed to impress investors, with shares in the grocer closing down 10.9p at 198p.

Bosses revealed plans to lay off 3,500 jobs and permanently close all its meat, fish and deli counters, along with 120 standalone Argos stores. But investors could not ignore the £438 million one-off costs.

Engine maker Rolls-Royce also had a job bloodbath, announcing 1,400 jobs are being cut in the UK and globally, as it continues to swing the axe under a plan to slash its workforce by 9,000.

Drugs giant AstraZeneca confirmed it expects to present the data from its Covid-19 vaccine by the end of the year as it unveiled pretax profits of 853 million US dollars (£654 million) in the third quarter, up from 409 million dollars (£314 million) a year earlier.

Investors had already priced in the vaccine news and with expectations being met, shares closed the day up just 18p at 8,529p – having jumped by double-digits on Wednesday.

Fashion chain SuperDry revealed sales slid over the past six months after the pandemic hit store footfall – down 23% in the 26 weeks to October 24. Investors took flight, sending shares down 5.5p, or 3.3%, to 160.5p.

Auto Trader saw profits slide over the first half of the year after offering customers discounts to help drive trade during the coronavirus pandemic. Early trading saw shares fall but by the end of the session they closed up 6.4p at 600.8p.

And ticket app business Trainline revealed a £43 million operating loss for the six months to the end of August due to the collapse in rail travel during the pandemic. But the loss was not as bad as first feared, helping shares close up 34.2p at 307.2p.