Soldiers arrive in Merseyside as Liverpool prepares for mass testing 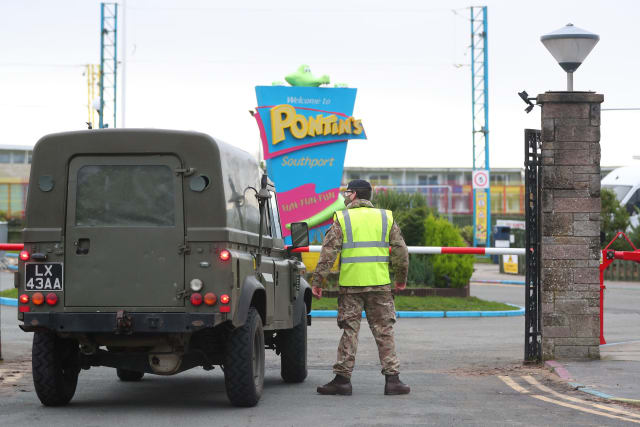 Hundreds of soldiers have been deployed to a holiday park in Merseyside as Liverpool prepares for a mass coronavirus testing programme.

Six new test centres, set up in council-run fitness centres across the city, will open their doors from 9am on Friday as the city begins a pilot scheme.

Everyone who lives or works in the city will be encouraged to get tested for Covid-19 even if they do not have symptoms.

About 2,000 Armed Forces personnel will be helping to deliver hundreds of thousands of tests and on Thursday, coachloads of soldiers were seen arriving at the Pontins Southport Holiday Park in Merseyside.

Military and police vehicles were seen entering the park, usually a holiday destination for families visiting the seaside resort, through an entrance manned by Army personnel.

Mayor of Liverpool Joe Anderson said: “This is an incredible opportunity to turbocharge our efforts to reduce coronavirus in the city.

“We are excited to be leading on this project, supported by the Department of Health and Social Care.

“Let’s all get tested, for our families, our mates, our Liverpool and set an example to the country and the world.”

Everyone in the city is being asked to get tested, but particularly health and care workers, other emergency services and key workers and school or university staff and students.

Lateral flow tests, which give results in under an hour, will be used along with existing swab tests.

A Liverpool Council spokeswoman said more test centres will open in the coming days and that the pilot is expected to last for an initial 10 days, with a view to it being extended.

Tests can be booked online or on the NHS app and centres will accommodate walk-ins on the first day of the scheme, the spokeswoman said.

Director of Public Health for Liverpool Matt Ashton said: “The aim of this project is to quickly identify people who have the virus and reduce transmission substantially.

“This exciting mass testing programme simply means asking everyone to volunteer to be tested, and for those who test positive to self-isolate straight away and prevent others from getting it.

“This is a pilot scheme and we won’t get everything right, but it is a huge chance to drive down transmission rates and get life back to normal more quickly.”

Soldiers will work alongside NHS Test and Trace and commercial partners to support the mass testing by planning logistics and delivering the lateral flow testing part of the programme.