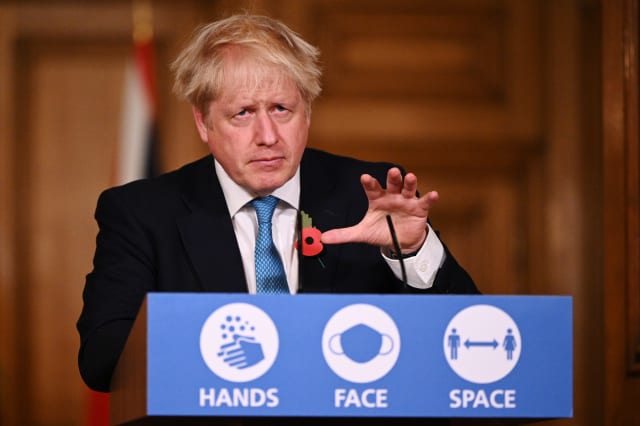 Boris Johnson has insisted four weeks of national lockdown should be enough to drive down the spread of coronavirus so the severe restrictions can be eased.

As England was plunged into a second shutdown on Thursday, the Prime Minister recognised many were “anxious, weary and fed up” after a rebellion on the measures from Conservative MPs.

Mr Johnson said he has “every confidence” the measures will work so the NHS will not be overwhelmed and the lockdown in England can be eased back into a tiered system on December 2.

The Prime Minister faced questions over whether he would be able to extend the national restrictions if necessary after 32 Tories defied the whip to vote against the measures.

“The advice I have received suggests that four weeks is enough for these measures to make a real impact,” he told a Downing Street press conference.

“These rules will expire and on December 2 we plan to move back to a tiered approach. There is light at the end of the tunnel.

“These are difficult times. While it pains me to have to ask once again for so many to give up so much, I know we can get through this.”

He said “the objective” is to return to regional restrictions next moth so “people across this country will be able to have as normal a Christmas as possible”.

Mr Johnson was questioned whether he would be able to rely on his own MPs for subsequent measures or if he would have to rely on Labour votes after a further 18 Tories, including former prime minister Theresa May, did not vote in a Commons vote to pass the lockdown regulations.

“I’m very, very grateful to MPs for voting through the measures that we did yesterday and I believe that I’m right in saying that the Government was able to do it with its own votes, but obviously it was good that this was a measure that was supported by people across all political parties, and that’s the right way forward in this country,” Mr Johnson said.

Pubs, restaurants and non-essential shops have closed their doors and people have been told to stay at home for the next four weeks but schools, universities and nurseries are remaining open.

By Mr Johnson’s side, NHS England chief executive Sir Simon Stevens assures sceptics that the second wave of the pandemic “is real and serious”.

“The health service has been working incredibly hard to prepare and to catch up on the care that was disrupted during the first wave,” he added.

Sir Simon said around 30,000 staff in the health service were either off with coronavirus or having to self-isolate, and “that has an impact”.

Mr Johnson continued to express optimism that science would succeed in finding a way out of the crisis.

“The number of shots that are currently raining down on the goal is very, very considerable from the scientists and the doctors, and one of them, I believe, is going to get to get through, and get through very soon,” he said.

– Chancellor Rishi Sunak extended the furlough scheme for the Treasury to cover 80% of wages of employees unable to work until March in a major U-turn from the Government.

– The Government announced that travellers arriving from Germany and Sweden from Saturday will be told to self-isolate for 14 days.

– NHS England said a further 236 people who tested positive for coronavirus have died in hospitals, bringing the total number to 33,873.

– The weekly surveillance report from Public Health England said Covid-19 rates were rising for all age groups in the over 40s.