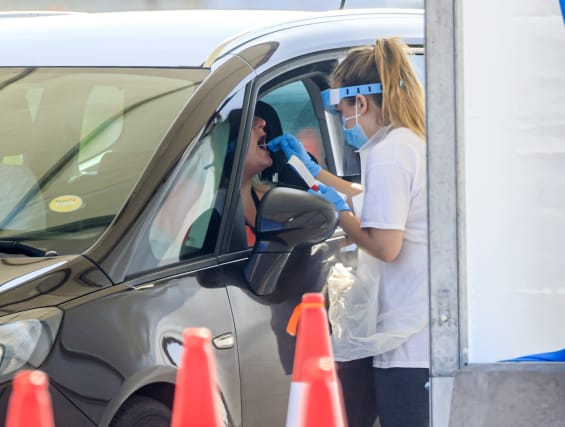 Prime Minister Boris Johnson has rejected a suggestion that NHS Test and Trace was having “no impact” on tackling the coronavirus pandemic.

Mr Johnson, however, said he understood “frustrations” with the service and that it had taken too long for people to get their results “sometimes”.

His comments come after new data showed the NHS Test and Trace system had reached the lowest-ever proportion of contacts of people who tested positive for Covid-19 in England.

Speaking at a Downing Street press conference on Thursday, Mr Johnson said the programme’s capacity had risen to 500,000 tests a day, describing it as “the biggest diagnostics … capacity anywhere in Europe”, with more than 30 million tests having been conducted.

Responding to a question from a journalist, he said: “Of course I understand people’s frustrations with NHS Test and Trace.

“It has come in for a lot of criticism and clearly it has taken too long for people to get their results sometimes.

“But they are improving, if you look at the turnaround times they’re getting better rapidly at the moment even though there are huge numbers of people being tested.

“I would really disagree with what you said about it having no impact.

“So, it’s had an effect in helping to reduce the spread.”

According to the latest figures, 59.9% of close contacts of people who tested positive in England were reached through the system in the week ending October 28.

This is the lowest since Test and Trace began and is down from 60.6% for the previous week.

A total of 137,180 people tested positive for Covid-19 in England at least once in the week to October 28 – an increase of 8% on the previous week and the highest weekly number since Test and Trace was launched at the end of May.

Just 26.4% of people who were tested in England in the week ending October 28 at a regional site, local site or mobile testing unit – a so-called “in-person” test – received their result within 24 hours.

Mr Johnson had pledged that, by the end of June, the results of all in-person tests would be back within 24 hours.

Of the 139,781 people transferred to the system in the week to October 28, 82.7% were reached and asked to provide details of recent close contacts – down slightly on 83.2% in the previous week.

Some 14.9% of people transferred to Test and Trace in the week to October 28 were not reached while a further 2.3% did not provide any communication details.

Only 3.5% of people in England who used a home test kit for Covid-19 received their result within 24 hours in the week to October 28, the same percentage as the previous week.

Before the new figures were published, Justice Secretary Robert Buckland said the month-long lockdown that began in England on Thursday will be used to “redouble our efforts” to expand the NHS Test and Trace programme.

Miriam Deakin, director of policy and strategy at NHS Providers, welcomed the recent increase in national testing capacity but pointed out that this week saw a drop of almost 50,000 people actually being tested across the country.

Ian Hudspeth, chairman of the Local Government Association’s community wellbeing board, said it is “hugely concerning” the system is “going backwards” in the number of close contacts reached of those who have tested positive.

Interim executive chair of the National Institute for Health Protection Baroness Dido Harding said: “We know that there are areas where we still need to improve and we are working tirelessly to make the service quicker and more effective every day.”