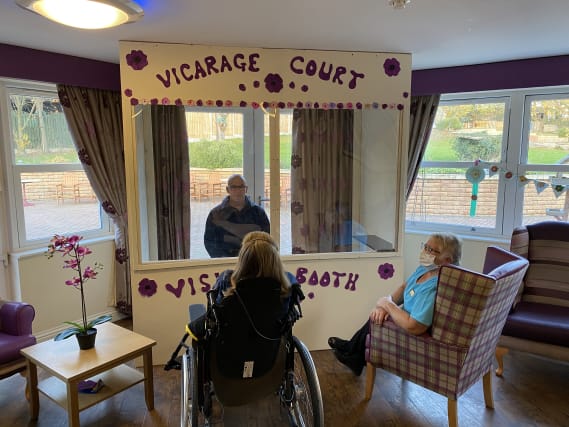 A care home has been inundated with interest from others around the UK after it built its own sealed visiting pod to allow families to safely see their loved ones.

The booth at Vicarage Court, in Featherstone, West Yorkshire was built by director Jagjit Singh with his maintenance technician out of wood and Perspex on the inside of a patio door at the home.

After it was decorated by residents, Mr Singh put pictures of the pod on Vicarage Court’s Facebook page where it got thousands of views and so many messages it took him hours to read them all.

Now he said 46 care homes have asked where they can get one.

Mr Singh said: “We’re a family run home and have always prided ourselves on our attention to detail.

“The new national guidelines have meant that only very limited visits are allowed for palliative care and the majority of residents can only have Zoom calls.

“But that’s just not the same.

“We thought we could come up with a better solution than some of the outdoor sheds that we’d seen – especially as it’s getting cold. We did not think that was very dignified.”

He said the pod has been fully booked by families for the 30-minute slots which allow for full cleaning between visits.

It has been such a success among the home’s 65 residents and their families, Mr Singh has built another which will start being used next week.

He said: “All the messages on Facebook show what a massive issue this is. It’s an ideal solution and the reaction has been fantastic.”

He added: “I took me three hours on Sunday to go through all the messages. Time and time again people are saying that they just haven’t seen their mums for nine months. It’s just heartbreaking.”

Mr Singh said the key to his design was to use the thinnest possible wood and Perspex to help with communication while keeping the pod totally sealed.

He praised the professionalism of the staff at Vicarage Court but said he feared that the current lockdown on care homes will last until at least February.