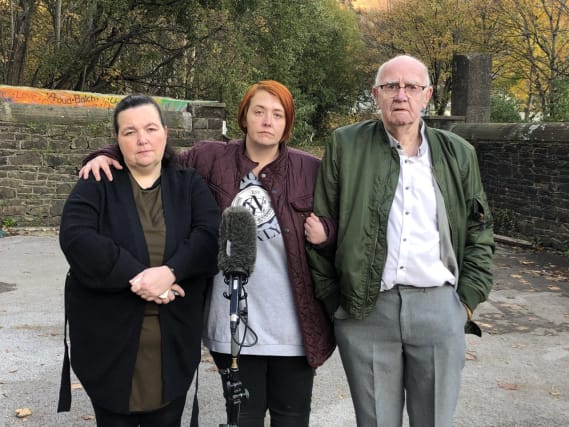 A family have spoken of their devastation and urged people to take Covid-19 seriously after losing their mother and her two sons to the virus.

Her son Dean Lewis, 44, was found unresponsive at his home in nearby Treorchy the following day and pronounced dead a short time later.

All three had tested positive for coronavirus before they died and their death certificates state Covid-19 as the cause.

She described how Darren, who had Down’s syndrome, had not left the house since February apart from to attend hospital appointments.

Mrs Lewis, who had chronic obstructive pulmonary disease (COPD) and emphysema, had also been shielding, with Dean only going out once a week to shop for his parents.

“We were scared of the virus anyway,” Mrs Mountjoy told Channel 4 News.

“But now we are absolutely terrified and I’m so scared because of losing the three of them that I’m going to lose my dad or somebody else.”

Ten other members of the family, including Mrs Mountjoy, her father and Gladys’ husband David Lewis, 81, and Dean’s wife Claire Lewis, 44, tested positive for Covid-19 and have been self-isolating.

Mrs Lewis developed symptoms of the virus around a week before her death and was admitted to hospital on October 25.

Dean Lewis tested positive after his mother was admitted to hospital and he was given steroids and antibiotics by paramedics on October 26.

His wife Claire Lewis told Channel 4 News: “As the week went on, he seemed to be getting better.

Mrs Mountjoy and Claire Lewis gave CPR for 20 minutes until paramedics arrived but Dean was pronounced dead a short time later on October 30.

Darren Lewis was admitted to the Royal Glamorgan Hospital after telling his father that he was unwell and was later transferred to the intensive care unit.

“He was doing ok and we thought he was going to pull through it and then the same night, he had gone,” Mr Lewis said.

The family were unable to be with Darren due to testing positive for Covid-19 and paid tribute to staff at the hospital for their “absolutely amazing” care.

“The only way we could see or speak to Darren was through FaceTime and they made that possible every single day he was there and we can’t thank them enough for that,” Mrs Mountjoy told Channel 4 News.

“As Darren passed, we were able to phone to say our goodbyes.

“They put the phone by his ear so we could tell him that we loved him and he was so strong and we were proud of him.”

His daughter said Mrs Lewis was “the best mother and grandmother anyone could ask for”.

Claire Lewis told how Dean had a “heart of gold”, was a “true friend” to people and adored his family.

Darren was described as “the most lovable happy man” by his sister Mrs Mountjoy.

The three funerals will take place at the same church, with the coffins brought in the night before when the family will be able to visit to say goodbye.

“We wanted them together so they were in each other’s funerals,” Mrs Mountjoy said.

Since the deaths, the family has been targeted by people on social media claiming that Covid-19 is a hoax.

Mr Lewis called for people to “believe this is real” and to protect themselves and their families.

“They want to spend a couple of minutes with me, my dad, Claire, Claire’s children and my children to see the devastation that we are going through as a family,” Mrs Mountjoy told Channel 4 News.

“Spend five minutes with us and they’ll know it’s real.

“Just please, please just listen to what the Government is saying and stick to the rules.

“Hold your family close and look after them.”

A GoFundMe page to help pay for the funeral costs has been set up at https://www.gofundme.com/f/carrrg-help-towards-funeral-costs.

Donations at the three funerals will be in aid of the Royal Glamorgan Hospital.