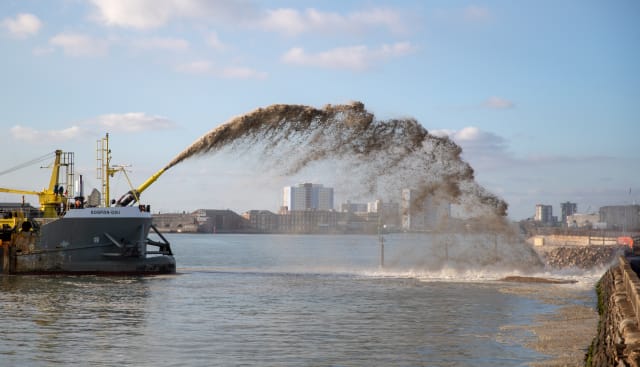 Tonnes of gravel have been “rainbowed” on to the foreshore in Portsmouth in the first stage of a £100 million sea defence scheme.

The dredger vessel Sospan Dau is spraying 5,000 square metres of gravel between Clarence Pier and the Spur Redoubt to create a temporary working platform to enable the work to begin.

The new defences will stretch for 4.5km (2.8 miles) from Old Portsmouth to Eastney, and are aimed at reducing the risk of flooding to more than 10,000 homes and 700 businesses.

In the next two to three weeks, the dredger will place about 18,000 square metres of material to create a second working platform between the Spur Redoubt and the Saluting Platform.

Southsea Coastal Scheme project manager Rupert Teasdale said: “The gravel being used is material that was placed offshore from dredging the Portsmouth Harbour approach channel in 2016 and 2017 for the arrival of the new Queen Elizabeth Class (QEC) aircraft carriers in to Portsmouth.

“The scheme is focused on zero waste and aims to reuse material wherever possible – this is a prime example of our commitment to recycling.

“It complements our plans to reuse material that will be broken and excavated out of the existing structures to provide fill material for the new sea defences – avoiding sending more than 92,000 tonnes of waste to landfill.”