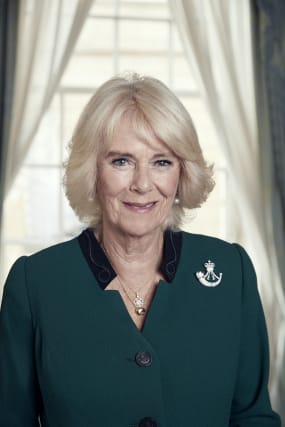 The Duchess of Cornwall has thanked the infantry regiment The Rifles from the “bottom of her heart”, telling them the nation is in their debt for all they do, especially in “these troubled times”.

Camilla took over as Colonel-in-Chief of The Rifles from the Duke of Edinburgh in the summer.

She also used her video message to pay tribute to her “dear father-in-law” Philip, who she said had “set the bar incredibly high” after decades in the role.

The duchess went on to say how proud her own late father, war hero Major Bruce Shand, would have been of her connection with The Rifles.

She said he only spoke of his wartime experiences on “rare and precious occasions” but she remembered the admiration he had for rifle regiments.

Her message to the troops, aired on the first day of England’s second national lockdown, came as Clarence House released a new official photographic portrait of Camilla proudly wearing a new brooch commissioned by the regiment.

The duchess received General Sir Patrick Sanders, Colonel Commandant of The Rifles, at Clarence House last month, when he presented her with the bespoke Bugle Horn piece made from white gold and studded with emeralds.

The jewellery was inspired by the cap badge of The Rifles – the bugle horn was used in the 18th century and beyond by the infantry to pass orders across the battlefield.

Camilla was seen wearing the brooch on her visit to Westminster Abbey’s Field of Remembrance on Wednesday.

In her video message, the duchess said: “Riflemen, with the rest of our nation, I am profoundly in your debt for all that you do, especially during these troubled times.

“Continue to uphold those qualities of discipline, courage and sense of humour that my father spoke of, and be proud of all that you represent.

“Wherever you may be viewing this message, on operations in Afghanistan, deployed to Estonia, on exercise in the UK or, indeed, enjoying some much-deserved leave, thank you from the bottom of my heart.”

Camilla’s father, Major Shand, who died in 2006, served with the 12th Lancers and was captured in Germany during the Second World War but managed to escape, spending two days hiding in the woods with a lieutenant from the Green Jackets.

The duchess recalled: “My father would only refer to his wartime service on rare and precious occasions but I well remember the warmth of his admiration for the rifle regiments and their discipline, humour and courage.

“He would be delighted to know my connection today to this very special regiment.”

Describing her role as a prestigious honour, Camilla added: “I must begin by paying tribute to my predecessor, my dear father-in-law, His Royal Highness the Duke of Edinburgh, who, having been Colonel-in-Chief of the successive regiments that have made up The Rifles since 1953, has set the bar incredibly high.”

She visited the Army troops at Beachley Barracks in Chepstow, Gloucestershire, in September, and heard how they had been deployed to support the fight against coronavirus.