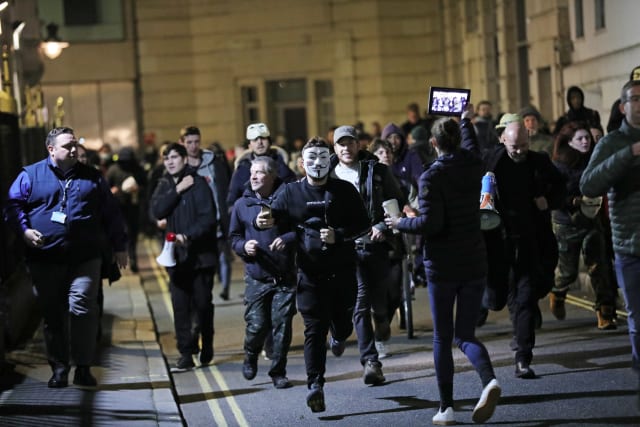 Hundreds of anti-lockdown protesters have marched through the streets of central London on the day tougher coronavirus rules came into force in England.

Police officers urged demonstrators to go home as they took to the streets near Trafalgar Square on Thursday evening, warning those who had gathered they were breaching coronavirus restrictions.

Protesters, very few of whom were wearing face coverings, began to walk up the Strand shortly after 6pm, chanting “freedom” and “no more lockdown”.

Trailed by a large number of officers from both the City of London and Metropolitan Police forces, protesters were repeatedly told to go home, with one officer shouting at a group: “You are breaking the law.”

Four protesters, one of whom was wearing a Guy Fawkes mask, were arrested by police officers near the gates of Charing Cross Station.

Shortly after 7pm, a smaller demonstration gathered near Primark on Oxford Street, where a number of protesters were grouped in by two lines of officers.

Those clustered in by police chanted “stand up” while officers encouraged protesters gathered nearby to go home.

“You need to leave, you are breaching coronavirus restrictions,” one officer told demonstrators.

The Metropolitan Police said that protesters were ignoring directions from officers and warned that enforcement action would be taken against those who did not disperse.

“This gathering is unlawful and is putting others at risk,” a tweet by force said.

“We are directing those there to go home.

“Failure to do so will result in enforcement action.”

A number of police vans and officers were still in place on Oxford Street shortly before 8pm, while a number of protesters remained grouped in.