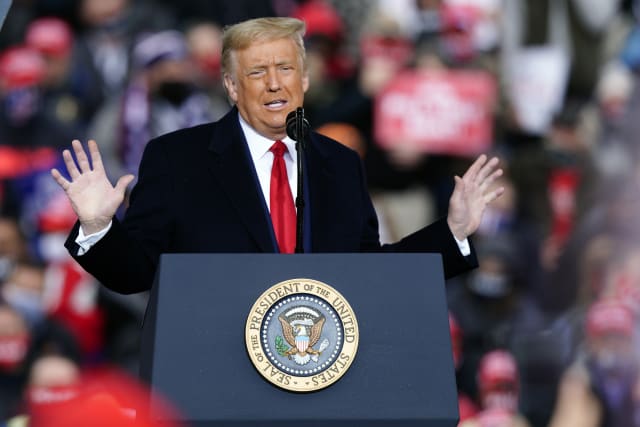 Twitter has labelled an election night tweet from Donald Trump “misleading” after the incumbent president claimed, without evidence, that opponents were trying to steal the historic poll.

Shortly after Democratic challenger Joe Biden told supporters he was “on track” to win the tight race for the White House, Mr Trump tweeted: “We are up BIG, but they are trying to STEAL the Election. We will never let them do it. Votes cannot be cast after the Poles are closed!”

He deleted his tweet after a few minutes, correcting “Poles” to “polls”, but the second attempt was hidden and given a warning by Twitter.

Facebook also added a warning to the president’s message on its platform.

A label underneath the equivalent post read: “Final results may be different from initial vote counts, as ballot counting will continue for days.”

The Trump campaign labelled the warnings an “attack” by tech companies, adding: “Silicon Valley continues its campaign to censor and silence the president.”

Meanwhile, Twitter users were quick to pick up on the president’s initial misspelling.

Author Michael Beschloss said: “’The Poles’ are ‘closed?’ Yes, Poland had a pivotal role in President Gerald Ford’s 1976 defeat when he claimed in debate that it wasn’t under Soviet domination. But not sure history is repeating itself tonight.”

And Tom Nichols, a senior adviser at the Lincoln Project, an anti-Trump campaign group created by former Republicans, responded: “Someone should Czech on the Poles.”