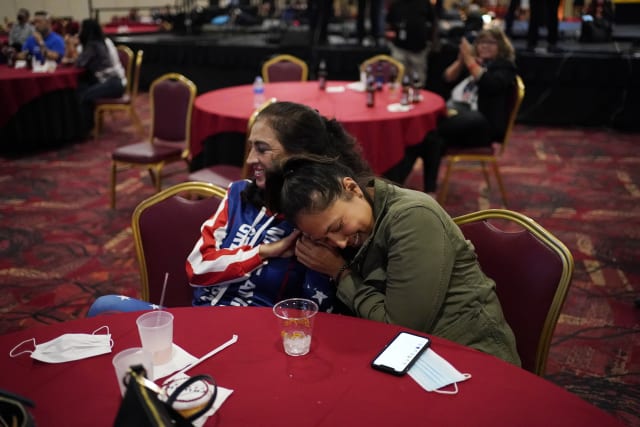 Donald Trump has won the bellwether state of Ohio and the fiercely contested state of Florida in a nail-biting race against Democratic challenger Joe Biden.

The challenge for the presidency remained too close to call, but the Republican incumbent appeared to be performing better in the ballots than had been anticipated by polling leading up to election day.

Voting was tight in many swing states and Mr Biden still had a potential route to win the race while having an early lead in Arizona – a once reliably Republican state that would be a major coup for the Democrats.

Ohio is key to Mr Trump’s chances of re-election. Whoever has won the state has gone on to take the White House since 1964.

Florida, and its 29 electoral college votes, was a must-win for Mr Trump to reach the 270 required for victory. No Republican has won the White House without it since 1924.

The race was also tight in the swing states of Georgia, Wisconsin, Michigan, Pennsylvania and North Carolina.

Mr Biden addressed supporters in Delaware as votes continued to be counted. He told supporters that they were “going to win this” but warned patience would be needed.

There were no upsets in safe states with both men winning predictable victories after a divisive presidential election overshadowed by the coronavirus pandemic.

The Republican took states including Mississippi, Oklahoma and Alabama, while Mr Biden won in his home state of Delaware, Illinois and Massachusetts, as well as predictably winning the heavily populated California and New York.

Mr Trump earlier said he believes he has a “very solid chance at winning”, while his Democratic challenger cautiously said he remains “hopeful”.

Mr Biden, a former vice president, has painted the election as the “battle for the soul” of the nation, saying democracy itself is at stake. Meanwhile, Mr Trump has reprised his “Make America Great Again” mantra.

Economic fairness and racial justice have been key issues in the election race. Both men have also clashed over the Covid-19 response as the nation reels from more than 230,000 coronavirus deaths and millions of job losses.

Mr Trump has sought to downplay the pandemic’s effect, saying the nation is “rounding the corner”. But his opponent has accused the president of having surrendered to the disease.

A noticeably hoarse Mr Trump spoke to Fox News by phone to speak up his “very solid” odds, predicting he could win with a larger margin in electoral college votes than in 2016 against Hillary Clinton.

“I’m superstitious about predicting what an outcome’s gonna be until it happens… but I’m hopeful,” he added.

National polls have consistently put Mr Biden ahead but the race was predicted to be closer in the battleground states.

Nigel Farage, the Brexit Party leader who has joined Mr Trump on the campaign trail, told the PA news agency high turnout could be bad news for his ally.

He said: “Obviously, it’s tough to judge. We’re dealing with a huge turnout, unprecedented in modern times. I have memories of the UK referendum: we had a huge turnout and Brexit won.”

Anticipation was building in downtown Washington DC as nervous voters wait for the national picture to become clearer.

As temperatures dropped, protesters gathered on Black Lives Matter Plaza Northwest near the White House. They were mainly peaceful but at least two men were detained after squaring off with officers.

Chants of “f*** the police” and “no justice, no peace” broke out while demonstrators called on police to release the men.

While the vast majority of the crowd of thousands was made up of Biden supporters, the few Trump fans walked freely while wearing “Make America Great Again” caps.

“I’ve been worried for the last year,” she told the PA news agency. “I’ve been sick for the last four years of what he’s done to this country. It would only get worse, we will become a fascist country if he gets elected.”

Each state gets a number of electoral college votes roughly in line with its population and they largely hand them all to the winner in that state. With 538 up for grabs across the States, 270 is the key number to win the presidency.

But the election night itself looked unlikely to reveal the definite answer many want with results as close as they were.

Mr Trump had already jeopardised the likelihood of a simple race by refusing to commit to a peaceful transition of power and having warned of a “rigged election”.

The president has invited hundreds of supporters to an election party inside the White House. Mr Biden will await the results in his hometown of Wilmington, Delaware.