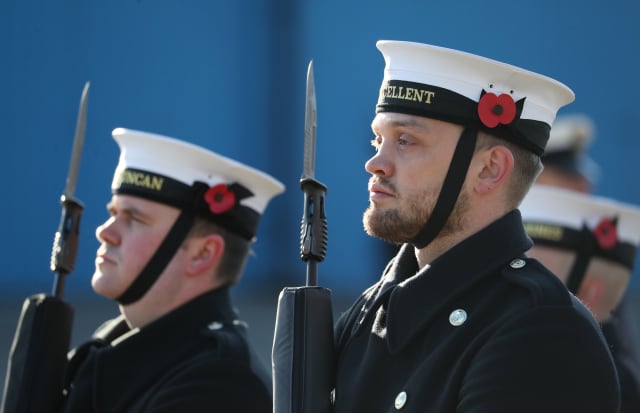 Royal Navy sailors have been rehearsing specially-adapted drills ahead of the Remembrance Sunday service at the Cenotaph.

Only 25 sailors and marines will be taking part in the Whitehall parade on Sunday – a quarter of its normal ranks in order to meet Government Covid-19 restrictions.

They will be accompanied by five buglers and a Corps Bugle Major from Royal Marines Band Portsmouth.

Warrant Officer Eddie Wearing, the Royal Navy’s state ceremonial training officer, has been working with the division for nearly three weeks, with final training taking place at HMS Excellent, home to Navy Command Headquarters in Portsmouth, ahead of a rehearsal in London.

WO Wearing said: “The format of the parade this year is exactly the same, it’s just the reduction in numbers so we can fall in line with Government guidelines on social distancing as they stand at the moment.

“We’re honoured and privileged to play our part on Sunday. It’s more important this year, more than ever, and because there are fewer people they’re each much more in the spotlight.

“This is a quarter of what you would normally see from the Royal Navy, so in theory there is no place to hide; their rifle drill needs to be pristine, their dress needs to be immaculate, which it is, and it will be on Sunday.”

He said: “I’m very proud, very excited, to go to the Cenotaph on Sunday to remember the fallen who made the ultimate sacrifice for everybody, and personally for me to remember my grandad who served seven years in the Army and unfortunately died a few months back.

“It’s hard times we’re going through, but the message stays the same; we’re still doing the same thing we do every year, and nothing changes.

“For the country, for the navy and all services, I think it’s a great morale boost for everyone to come together for those few minutes and to remember the reason we’re there on Sunday and forget the hard times we’re going through now.”