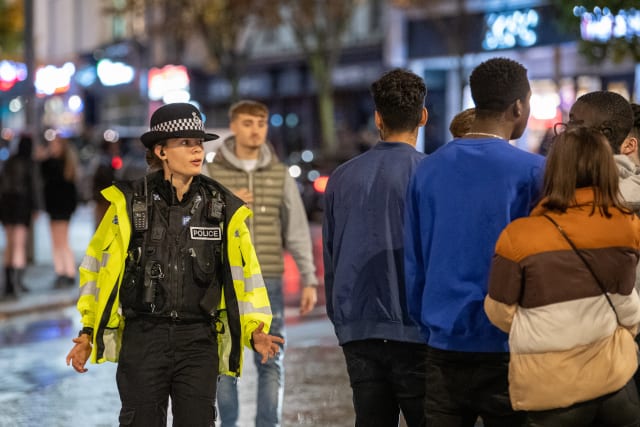 Priti Patel made the comments during a meeting of the National Policing Board on Wednesday.

According to her spokesman, she told senior police figures “we now need you to strengthen enforcement”.

Addressing the meeting, which takes place around four times a year to scrutinise the progress of the 20,000 police recruitment campaign and other policing matters, she said: “As our nation battles to suppress coronavirus I am acutely aware that we are asking more from our outstanding officers, and that they have been working flat out to keep people safe.

“But the Prime Minister has been clear that he wants to see tougher enforcement of the necessary restrictions in order to save lives.

“We have played our part – strengthening and simplifying the rules to make it easier for officers to act and providing an extra £60 million for enforcement, with £30 million going direct to the police.

“We have empowered and resourced you to do more, and we now need you to strengthen enforcement, and that the law-abiding majority are not endangered by those who flout the rules. I want to thank all of you for the contributions you have made in working through the new restrictions.”

She also said it is “crucial” as the second national lockdown approaches in England that police look to use all powers available to them to tackle what she called “hidden harms”, like stalking, slavery and trafficking, sexual offences and domestic violence.

Appearing to allude to the investigation into an interview by Brexit campaigner Darren Grimes with historian David Starkey, she described freedom of speech as a “cornerstone of our democracy, and a right that we must all defend”.

She said: “In recent weeks we have seen public concern over freedom of speech following investigations into comments made by public figures, so I wanted to set out my thoughts on this here today.

“Decisions of the police to investigate particular cases are clearly an operational matter which I cannot get involved in and will not comment on.

“But as a general principle, while it is the job of the police to maintain order, we also look to you to uphold the law, which in this country, has freedom at its heart.

“Freedom of speech is obviously a cornerstone of our democracy, and a right that we must all defend. Now more so than ever given the debates we are seeing around the coronavirus regulations.”

Starkey attracted widespread criticism after he said slavery was not genocide because there are “so many damn blacks” during the interview, that was posted online.

The probe was reviewed by a senior Metropolitan Police officer, and after further legal advice from the Crown Prosecution Service, it was dropped.

Reacting to the news that the case had been closed, Mr Grimes said his arrest was “truly chilling”, while Starkey said its collapse was “a personal vindication” and the investigation “should never of course have begun”, adding: “From the beginning it was misconceived, oppressive and designed to misuse the criminal law to curtail the proper freedom of expression and debate”.