Politicians and celebrities weigh in on nailbiting election night 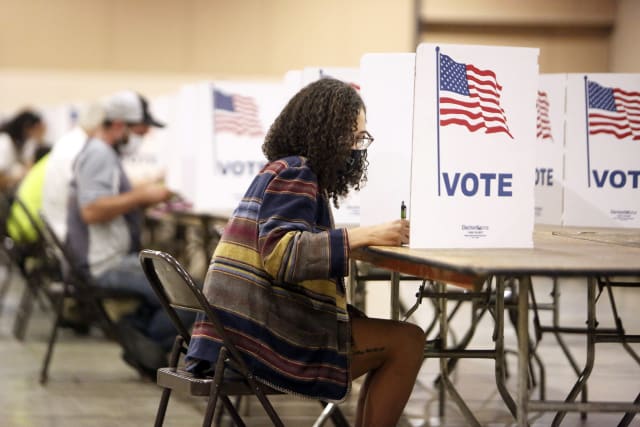 Celebrities and politicians alike have been quick to react to the as-yet undecided US election on a night of twists and turns.

High-profile figures weighed in as they anxiously awaited the results as they were announced state by state.

Talkshow host Jimmy Kimmel described waiting for the results as “like being awake during your own surgery”.

Many have called for calm and patience as votes are counted, particularly in states where votes cast on the day have been counted before absentee ballots cast earlier.

Joe Biden has said he feels “good” about the situation and said: “It’s not my place or Donald Trump’s place to declare the winner of this election.

“We believe we are on track to win this election.”

Democratic congresswoman Alexandria Ocasio-Cortez tweeted that she did not want to comment much on the results as they are still evolving.

However she added: “…but I will say we’ve been sounding the alarm about Dem vulnerabilities w/ Latinos for a long, long time.

“There is a strategy and a path, but the necessary effort simply hasn’t been put in.”

President Donald Trump tweeted “We are up big” early on Wednesday morning, but his comments have proved controversial.

Despite being from the same political party, Republican congressman Adam Kinzinger hit out at the president’s remarks.

He said: “Stop. Full stop. The votes will be counted and you will either win or lose.

“And America will accept that. Patience is a virtue.”

Meanwhile rapper Kanye West, whose improbable run for the Oval Office has not picked up much steam, has already hinted at a future campaign nonetheless.

Lord Of The Rings star Elijah Wood praised those who had worked to oust Mr Trump.

He tweeted: “The biggest, warmest ‘thank you’ to every person out there fighting so hard to finally end this national nightmare.

“You’re the heroes we needed and you came out in droves.”